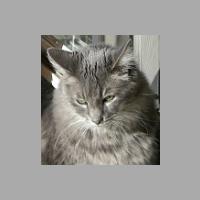 Â <br /> My First Painting<br /> <br /> <br /> My interest in art began in 1996 and got more serious in 1998, when I did an online tutorial by Al Dawson, learningÂ  computer 2d painting. (see painting .. lol)Â  After playing with that for a while my interests then turned towards 3d art and I bought Bryce 2,Â  just to see, if indeed, it was the direction I was leaning. I became addicted and purchased Bryce 4, whichÂ  was the current release of the program at the time.<br /> <br /> I dabbled a bit with Poser 4, just to have the ability to get some 'human' element into some of my renders. I found the software and the interface so frustrating that my interest in it never really peaked. I also upgraded to P5 and then to P6, but still found the software too frustrating for my tastes. I admire the artists who do such great work withÂ  Poser, but just found it to not be my 'cup of tea' .. so to speak.<br /> <br /> I am a retired person so am able to devote a large amount of time doing what I love most. Art has become a very important part of my life, sometimes frustrating, but eventually rewarding. Some of it mediocre, some that I like very much and a lot that remains unfinished. I do most of my art work during the winter months as I spend a lot of time outdoors during the summer. <br /> <br /> My main current art tools include Bryce 6.1, Photoshop 6 (an old version, I know, but it works for me) and a little bit of Poser 6.<br /> <br /> I love all kinds of music, always have and find it so inspiringÂ  when doing art. Whether it be instrumental, lyrics or both.<br /> <br /> Favorite current music/artists:<br /> 1) Would have to be anything by Barbra Streisand. Long time fan of her's since her beginning. 60's? Dating myself.<br /> 2) Andrea Bocelli .. favorite dvd/cd "Under The Desert Sky"<br /> 3) Chris Botti .. "Italia" .. haunting trumpet, love his "Nessun Dorma" and most everyone's version of this. Love the entire cd!<br /> <br /> Many more, but all for now.<br /> <br /> Thanks for reading and all the great comments/views on my images.