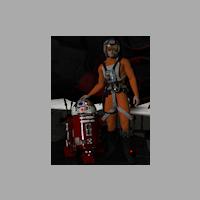 I'm going to write about myself for a bit now. That's what a Bio is, isn't it.<br /> I've been thinking about how I got into this 3d art thing, and realised it started when I was 8 years old, thats over 30 years ago before I even knew a computer existed.<br /> How is that possible? I hear you ask.<br /> Simple, I was given a camera. A second hand, old, kodak brownie, using film. To all the younger people, film is an amazingly expensive way to make a lot of bad pictures. It forces you to be good, 'cause when you've got a maximum of 24 exposures per roll and it takes a month to afford a new roll, every photograph has to be thought out. Did I mention it took at least a week to see what you had photographed.<br /> To all those who complain about overnight renders: what the hell are you complaining about?<br /> So 10 years later I turned up at University and one of the first experiments we did involved an SLR camera, a meter rule and a telephoto lens.<br /> Thats right, I learned the equations for depth of field.<br /> Oh My God.<br /> I suddenly had scientific principles to apply to the art. I bought a cheap second hand SLR, with the only electronic gadget on it being a light meter. Everything I took was blurred for a while untilÂ I got the hang of it.<br /> I learned film chemistry. I joined the photographic society and was inducted into the ranks of the dark room journeymen and the gurus of the black and white film. I basically learned all that I could and enjoyed all of it.<br /> After I left University I barely picked up a camera again, except for special occasions and on family requests. As money flow increased I got a series of flashier cameras but that was more of a gadget fetish than a serious attempt to take up photography again. Finally I got a digital SLR and suddenly I was unfettered from film. I bought (yes bought) Paint Shop Pro when it was easy, and was introduced to the digital dark room.<br /> Ok, Ok, I'm getting to the 3d.<br /> I've always been good with computers, from the very beginning. I've always owned a computer since I was 13. (64K was a huge memory back then. Jeez).<br /> 15 years ago I thought I'd give POVRay a go. It took a day to render part of a 320x240 image of some balls. Gave up on that.<br /> Progressing through the years with faster computers and demo versions of 3d software never gave me satisfactory results. Maybe I was too demanding. Tried Poser. Plastic mannequins. Tried DAZ studio. Mat mannequins. Tried Blender. I only haveÂ 2 hands 8 fingers and 2 thumbs thank you very much.<br /> What finally worked for me was The Sims2, The Sims3 and milkshape. Game modding, go figure. (I've also done some Doom and Quake stuff come to think about it now.)<br /> [Hey just googled my screen name. I show up on modthesims still.]<br /> Finally I took the plunge and bought Poser8 on offer. Good now, enjoyable, but I still wanted more.<br /> That's when I found Carrara Pro (for the price of a book), and I had the PC to run it.<br /> I finally hadÂ a piece of software that works the way I think about photography. I could use my morphing skills that I had developed in Milkshape, I could texture the way I had for the Sims. I could pose, compose and light the way I wanted to and then I could get in there and push verteces (vertexes) around until I was really happy. And better, I could render out test shots in seconds. I render a lot of tests.<br /> Did I mention I still think like a photographer, one who has tried every medium of art possible at one point or another (airbrushing, comic books, pastels, oils, acrylics, gouache, inks, the lot).<br /> One of my mostÂ favourite references is still 'How to draw comics the Marvel way', good advice and illustrations on every page. It works for composing all kinds of action shots.<br /> Each render I do involves something I have learned from another medium. I have not yet begun to put all of the techniques I know into any of my renders yet, but I progress in some way with every picture.<br /> One day I may put a picture together where I can say I am 100 percent happy with the result, but I doubt it. Then again, that's part of what keeps me going.<br /> (I also write for fun, but badly, I'm ok on dialogue but suck on prose. Never read anything you wrote at 17, you'll realise what a prat you were)