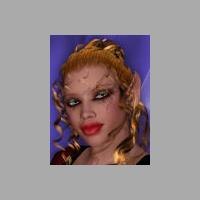 Well, where to start...
I'm a 47 year old single mother of two and grandmother of one. I've been involved in art and crafting for about 10 years, beginning with hand made Christmas ornaments and such, and moving on to Photoshop and paintshop about 8 years ago. For a while, I had a very large website full of custom websets, though I no longer have a site like that.Â  About a year and a half ago, I got intoÂ Poser more seriously, and just recently started as a vendor here on Renderosity.
Other than art and graphics, I enjoy MMORPG gaming, mainly Everquest and Everquest II. I was an Everquest guide for about 3 and a half years. I do play a few other games, and started out on the fantasy role-playing game kick with the orignal Zelda for NES. Other online games I enjoy are mostly puzzle type such as Zuma, when I want a minor diversion to get my mind off things.
I also enjoy reading (Stephen King rocks! hehehe), gardening, fishing, camping, and cooking.
My dream is to go back to school and get an associates in graphics/multimedia. Someday, I'll manage to do just that, somehow. In the meantime, I'll just keep plugging along and learn all I can on my own.
Edit: June 2012
Four years later, and I have nearly realized my dream. I hold an associate's degreen in visual communication, and I am 6 months away from a bachelor's in digital entertainment and game design. The next dream? Build my store here, and freelance models for a game company. I'll get there eventually.