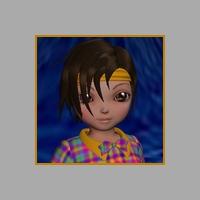 Since this site doesn't show French characters I guess I'd betterÂ remove theÂ French version of myÂ intro. It just looks awful in French... here is a sample of what it looked like!<br /> ... Fran?se ... Qu?c... d?uvert ... d? ... infinit?e... ?pprendre!Â  (NICE HEH???)<br /> Hello! My name is France and I live in Quebec. I discovered the wonderful world of 3D in April 2004 when I bought Poser 5. I've learned quite a bit since then but I still have so many new things to discover!<br /> BIO<br /> I don't pretend to be an artist. I would call myself a computer addict and I love to learn how to use new software. I am retired and I play with PaintShopPro, Poser and Bryce. (EDITED: Since DAZÂ released DS3A I have been using it instead of Poser. I think it is much easier to use and IÂ get to see exactly what I'm doing while IÂ pose my characters and props.)<br /> What I have done so far in 3d World...<br /> <br /> July 2004: created Sara's Fan Club that wasÂ managed by bnetta. I was too new to 3dWorld at that time to actually manage a group but when my suggestion to create such a group seemed to interest many Poser Forum users, I asked for someone to create it with me and manage it: Netta volunteered and she did a great job! <br /> Â <br /> November 6, 2004: 3dSaraCreations (a group of generous and talented artists who worked hard together to give you wonderful freebies). We had to close 3dSC but ourÂ freebies are still available at http://www.jalberts.net/francemi/3dSC/ <br /> Â <br /> Spring 2006: Bought my own domain name and webspace at PowWeb (great host BTW) and moved my website from Jeff's server to PowWeb <br /> Â <br /> August 14, 2007: created an exclusive Club for 3D kids &amp; cute toons lovers:Â Kids &amp; Cute Toons Club. I had often felt that my freebies were not appreciated when they were for kids or cute toons. There were only a few replies to my messages in various forums so I decided to group all these people together in a place where we can enjoy what we like without being snubbed by "purist" artists. It is a fun club and over these 2 full years we have built a very close-knit virtual family.<br /> <br /> <br /> Fall 2008:Â started a new freebie websiteÂ "KCTCÂ Freebies" that hosts freebies from KCTCÂ members who either don't have a website to host their freebies or simply want to contribute to our group's website.