I have modeled in real life a bit. My introduction to 3d imaging was through making pictures of my adventures in Second Life and over the10 years I've been learning Poser and making Poser pictures. In real life, I am a near completely retired health care professional and a full time grandma. In my digital life I am a Second Life heroine, a Second Life villainess and here and at Deviant Art I'm a budding 3D artist.

My next big project is to learn Blender. 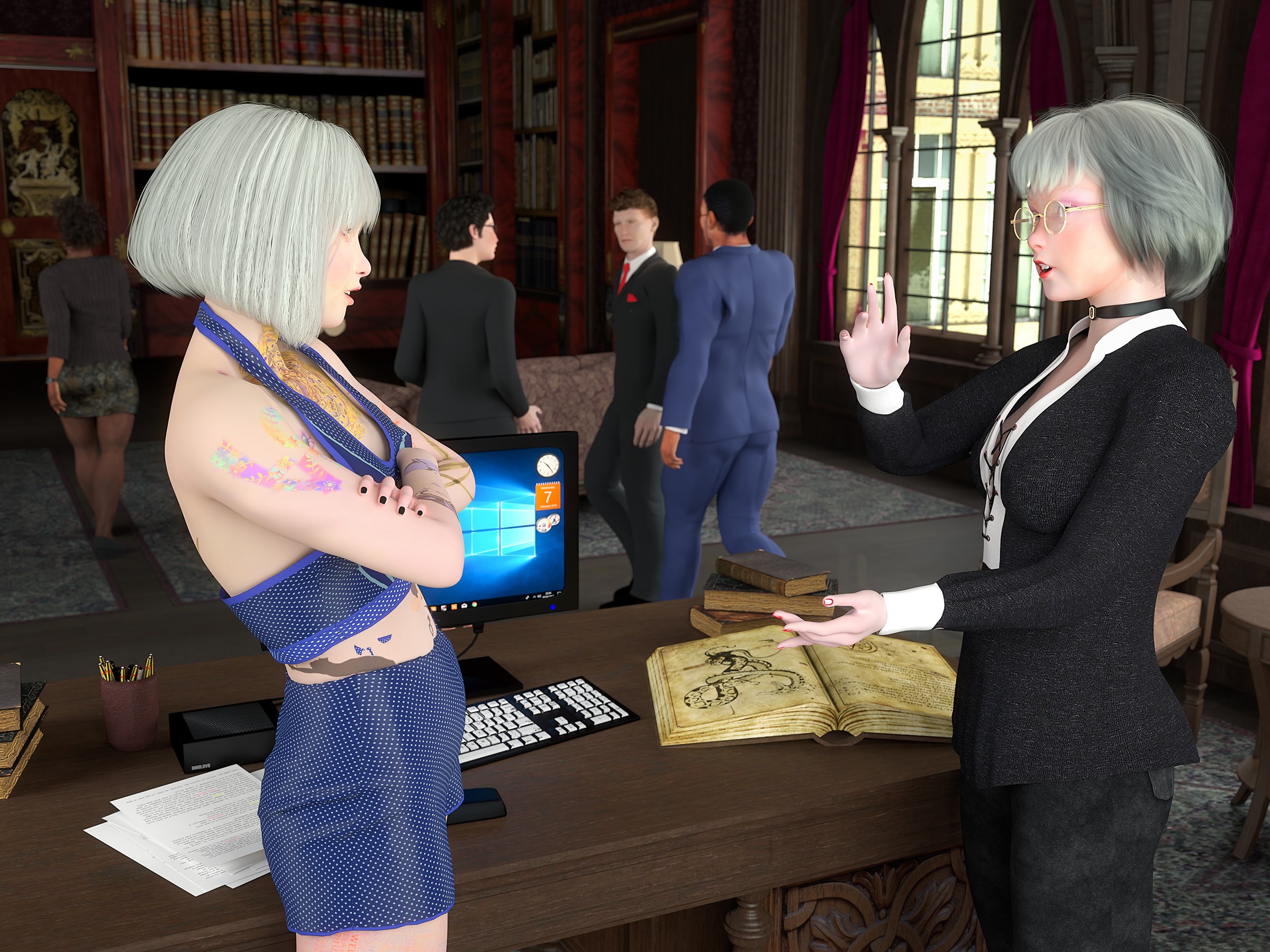 Ella and Jake escorted the Federal agents out of Professor Van Humbeek's study as the Professor rose and turned to exchange impressions with her sister, Dorotea. "I suppose that all went well," the Professor allowed. "Although it was probably the strangest afternoon I've ever had!" She laughed and added, "And I'm a paranormal investigator!" Dorotea snorted. "Lizzie, you still don't know some important things about this afternoon that're likely to make you think it's even stranger. First of all, Vladlena Bubnoff experienced a crisis apparition in the guest bath room. She claims her brother, a conscripted Russian soldier, warned her to flee." Oh my stars and garters!" the Professor exclaimed. "That IS interesting. Makes me even more glad I hired her. Crisis apparitions are fascinating! We need to see if her brother is alive or dead and..." Dorotea interrupted her sister's enthusiasm. "There's more. Let me ask you something: was Grace present during the interview?" Oh yes, Tea. She's very interested in my affairs anymore. It's a shame you aren't able to see her unless she expends some effort to appear to you. What's that got to do with the price of tea in China?" Dorotea nodded to herself. "I thought as much. Lizzie, I think Lena was able to see Grace. Didn't you notice how that girl kept looking to her side and over your shoulder? I think she was nervous about seeing Grace when, as far as she knew, no one else could!" Elizabeth Van Humbeek was taken aback. "I wrote that off to natural interview nerves and having to speak a second language. But now that you mention it, her side glances would have been directly at Grace. I get so used to being the only one that sees her. And now..." The Professor's voice trailed off. "What, Lizzie?" Dorotea prompted. "Grace isn't here. I think she left when Vladlena did." The Professor frowned. "I wonder where she went?" Molly's art notes: Set up and rendered in Poser 12.0.1029 and tweaked in Photoshop. Professor Van Humbeek, her sister Dorotea, and her personal assistant Ella Hamilton are all based on the La Femme mesh with enhancements by Tempesta3d and Afrodite-Ohki. Ella's husband and head of security and IT for the Van Humbeek estate is based on Dusk. The male agent, Leonard Cumming, is based on M4. The female agent, Eliza Braun, is based on V4. Professor Van Humbeek's study is the Gothic room by RPublishing.

Jekyll and Hyde for M4
By vyktohria

Brothers for Dusk For Poser
By Virtual_World

Iolanda for La Femme
By Afrodite-Ohki

I'm glad you're enjoying this. I feared that it had kind of bogged down in that most of the images and the story itself consist of people blabbing. XD

Heh. Yeah, that's pretty much been all that's going on for a few pictures in the story. =)

I appreciate the comment and I'll keep trying to work with poses and expressions that bring life to my story as I've gotten pretty committed to it.

a very natural scene with good poses even with the background characters.

Thank you, my dear. I spend a lot of time with the posing, of course, and it's lovely of you to comment upon it.

Little lost robot in the Forest of Darkglass

Chull in the Forest of Darkglass

A belated New Year pin up

49 - Right where she wanted them

More denizens of "the gut" of New Babbage

The Van Humbeek sisters and a ghost

Just in time for Christmas