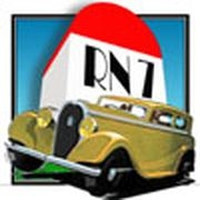 Thank you ladies and gntlemen for your kind comments about my previous models. This one is a higly detailed MB 81 dump truck soon available in my 3DClassics'store at RR, either for Poser or for DAZ Studio. The Mack B series is a model line of trucks produced by Mack Trucks between 1953 and 1966. The successor to the 1940-1956 Mack L series, the B-series was a line of heavy conventional-cab trucks. Adopting a more streamlined appearance over its predecessor, the B-series was designed with a sloped windshield and larger, rounded fenders. The model line was sold in multiple configurations, including tractors and straight/rigid trucks, cowled chassis (delivery body or bus), or fire trucks. The B-series was the first Mack truck produced with a diesel engine, introducing the Mack-produced Thermodyne inline-6 in 1953. During 1966, Mack replaced the B-series with the Mack R-series, which lasted into the 21st century. In total, 126,745 examples of the B-series were produced over 13 years. The heavy-duty series Mack B80 featured with a metal hood and angular front fenders. They were developed specially for construction and off-highway jobs. The B80 got a reinforced 20-speed transmission and replaced the LJ and LM series.

Awesome modelling, my friend! Wow, I used to have one just like itin the early 80's when I was like 5yrs old, load up my sister's Barbies in it