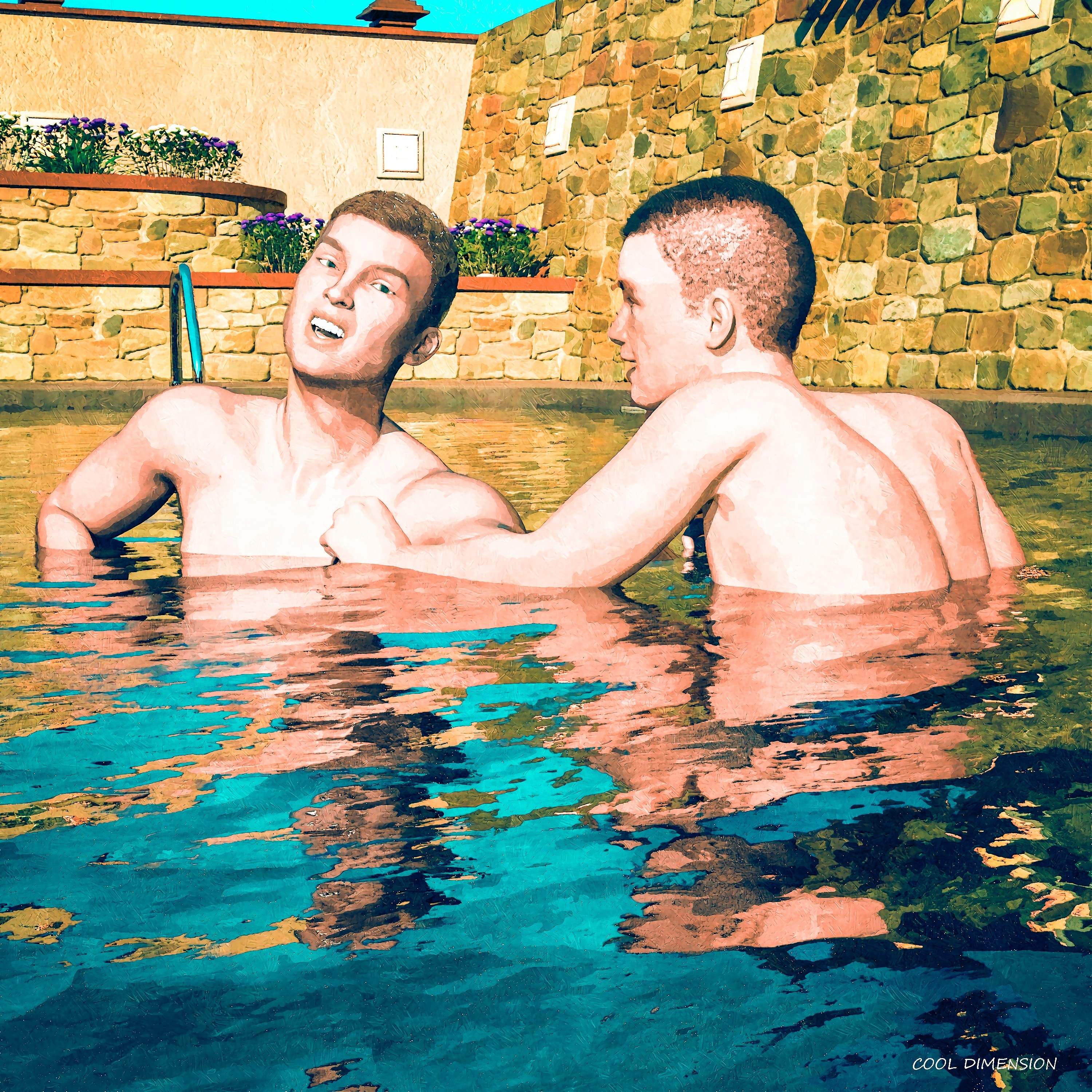 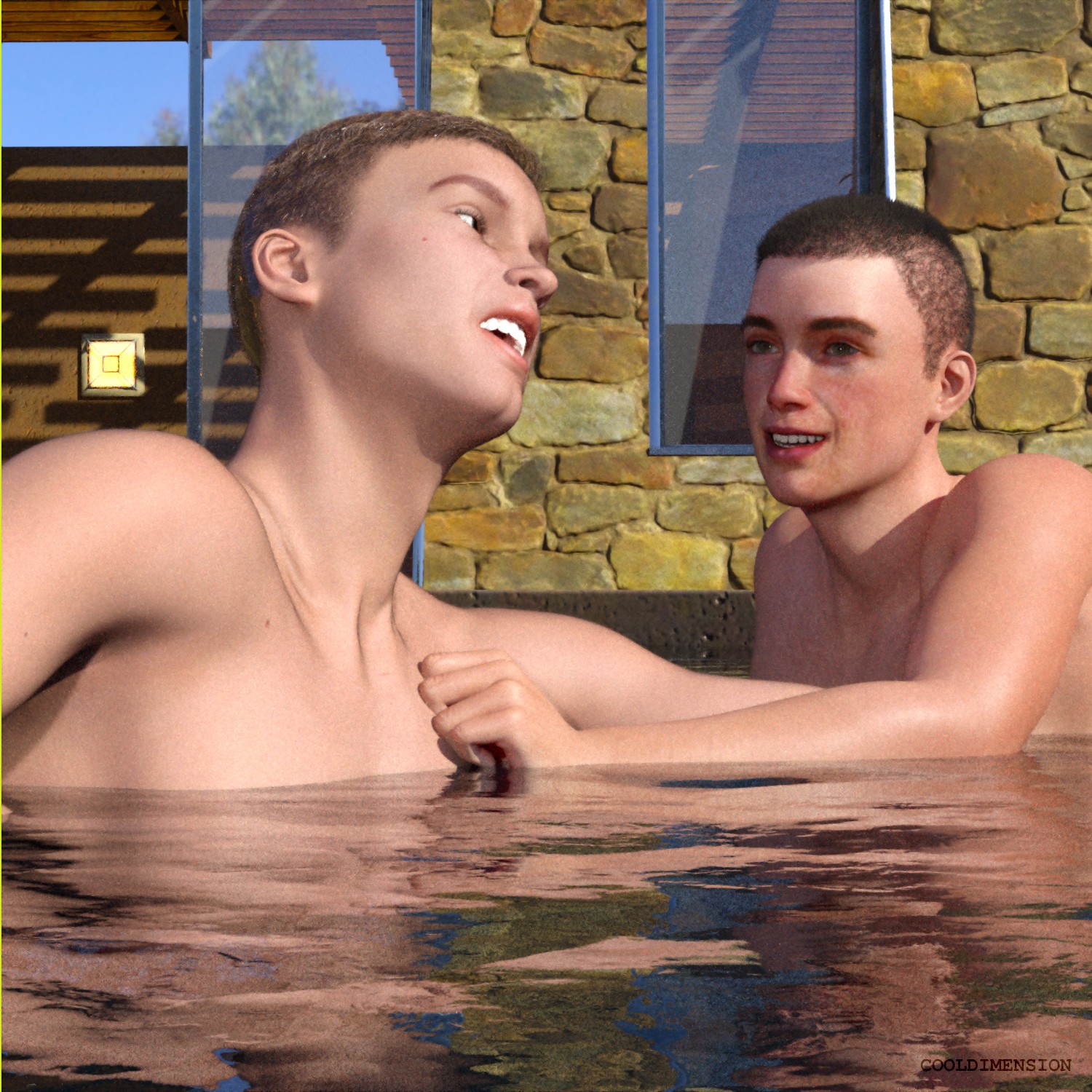 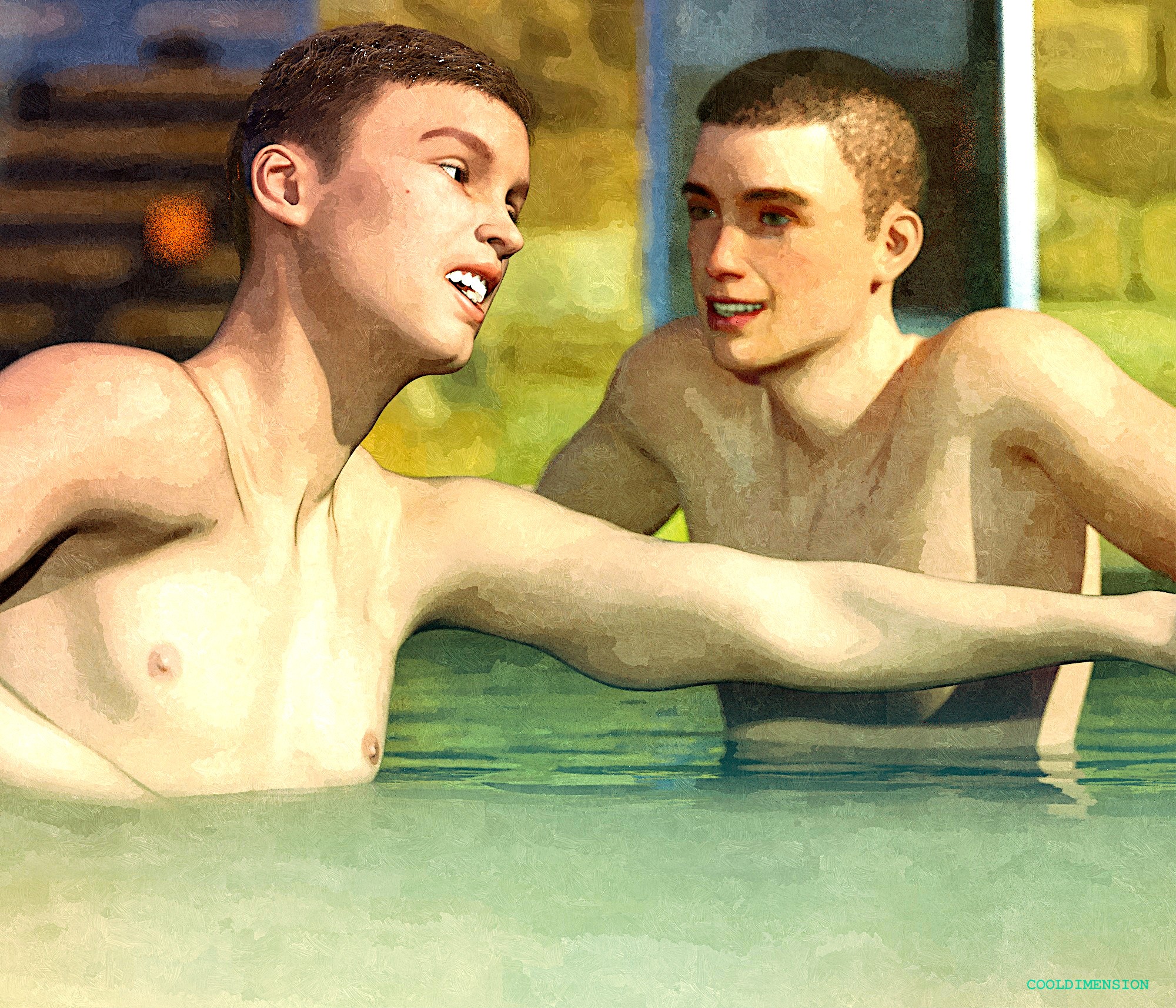 "GULP....Gulp...Glug!" Van gasped, as he sank down into the pool water! "It's Okay!" Mab cried. "Relax! I've got you!" Mab quickly put his arms under Van's armpits and lifted him up to the surface. He knew from what Avery Goldman had said that Van needed help with his swimming, but there was something more troubling going on here! Van gasped for air and leaned his head back. Mab could feel that Van was shaking all over! "Your Okay!" Mab said in a kind tone. "Just relax, Van! I have you. Your safe." "I thought I was going to drown!" Van answered. "I don't know what happened!?" "Are you sure you won't wear the flotation device?" Mab asked. "Then you wouldn't have to be afraid of going under!" Van paused. He had refused to put the flotation ring on and had insisted he could swim just fine! "You were swimming great!" Mab said."Then suddenly you just went under!" Van suddenly realized that Mab had his arms under his and was supporting him. Van glanced over and looked right into Mab's eyes. His face was so close to his! "This is the terrible!" Van thought. "The man I despise the most, who I blame for my downfall has seen me fail miserably! And if that wasn't bad enough, here he is holding me up and protecting me!" "I can tell by your form you know how to swim!" Mab said. "What made you go under like that?" "Oh! Wouldn't you like to know!" Van snapped. "That would be another thing you could laugh at me about! You can tell everybody at the Academy about it!" "What are you talking about?" Mab asked. "I've never laughed at you! I just met you today!" "Liar!" Van said as he squirmed out of Mab's protective arms holding him up. "My Dad told me how you made fun of me! How you told everyone at the scholarship competition what a loser I am after you defeated me!" "Scholarship? You mean the Tryon Planetary Scholarship?" Mab said with an astonished look. "I didn't even know you were from Tryon!" "Really? I am sure Avery would have told you!" Van snapped. "Avery doesn't talk behind people's backs!" Mab answered. "I swear to you, Van! I never did that! I would never would do something like that!!" "You must have known about me!" Van answered. "We competed against each other!" "The competition is sealed, Van! Everyone is given just a number and nobody actually sees who they are competing against!" Mab answered. "I never knew you even tried to win that scholarship!" Van could tell that Mab was telling the truth, but something deep down within himself refused to accept it. There was a long pause and then suddenly Van blurted out: "Ansor Provence!" Van stammered. "I was in the flood of Ansor Provence!" "Van! That's why you are afraid of the water!" Mab said. "Yes! I really don't want to talk about it. It was a miracle I made it out of the flood waters!" "Van, don't you see that you faced a situation like that and survived?!" Mab said. "That experience can give you confidence instead of fear!" Van looked at Mab and felt a strange effect come over him. In his heart and mind he accepted what Mab said as true! "Your right, Mab!" Van said. "I did survive! I swam my way out to safety!" "You faced that flood and lived! Swimming in a nice pool is nothing to you, now!" Mab said. "You know it's true!" Van felt an ocean of strength and confidence well up within him. He stretched his arms out and started swimming laps with no fear at all! "Look, Mab! I'm swimming!" Van cried out in joy! "I'm swimming and I am not afraid!" Mab smiled and watched Van carefully. Van Swam back and forth with ease, but deep down in his mind he could feel his hatred of Mab gnawing and clawing to get out! To be Continued!

As usual, your work with the story and the renders are fantastic and so well done! :-)

Thank you so much, Johnny! I appreciate your supportive comments!

Thank you so very much, Saby55! I appreciate it!

a turn of events that could spell trouble for Van

Thank you for viewing and commenting, Richard! Yes, you are very insightful!

Beautiful water and characters' skin is so realistic!

Thank you do much, nemesis74s! I appreciate the kind remarks and you viewing and commenting!

Sometimes progress happens by little steps! Here we have an example! I hope Van can overcome his hatred for Mab! I think they would become great friends over time! Excellent images! Love them all! Great water effects and a fine attention to details! Many fine praises and accolades from my to you my good friend!

Thank you so very much, Radar! I appreciate all your supportive remarks! It will be interesting to see what happens next!

Poor Van. He's really been through the wringer, between his dad's abuse and lies and his escape from the flood! It'll be hard for him to let go of his hatred for Mab, but it should get a bit easier the more he gets to know the "real" Mab vs. the monster version in his mind! I'm glad Mab was able to restore Van's confidence in swimming!

Thank you for all the kind comments and insight, perpetualrevision! Yes, it's a battle between real and imagined and there is a lot more going on with Van that I hopefully will show shortly!

greatly done on this. what will Van do next?

Thank you so much, Steve! I appreciate it! Van has some more secrets and events happening!

Hi, great render and storytelling :) I like the different graphic styles a lot...

Thank you so much, Stormrider75! I appreciate it!

Thank you so very much, starship64! I appreciate it!

Handsome characters, II really like the way you did the water effects and the render... wonderfully done image !!

Thank you so much, Madame! I appreciate your kind comments!

Thank you so much, Jean_C! I appreciate it!

Thank you so much, rayag! I appreciate it!

Van really does struggle with not just water floods but his own flood of emotions! Very powerful part of this story

Thank you so much, APlusDesign! Very insightful comments and I appreciate the kind remarks!

Great artwork, and a great continuation of the story.

To be honest, I could deeply identify with Van, especially when I was much younger. I was scared to death of getting my head underwater! I'm still not terribly enthusiastic about it, but I can jump into a pool and go under for a brief time without freaking out like when I was a kid. I actually would enjoy it now with all this hot weather! LOL

Thank you so much, Rod! I appreciate the kind comments very much and thank you for sharing that personal story! I thank you again for reading my work!

Very good pictures. I can almost feel the cool touch of the water.

Thank you so very much, Rozsakert! I appreciate it!

I really love this new image, the 3 versions are looking simply great!

Thank you so much for the kind comments, Ute! i really appreciate it!

Big progress can be made in small steps! I hope that Van will soon see the truth!

Your illustrations all look super!

Thank you so very much, Flint_Hawk! I appreciate your insightful and kind remarks!

Thank you so much, MeInOhio! i appreciate your kind remarks!