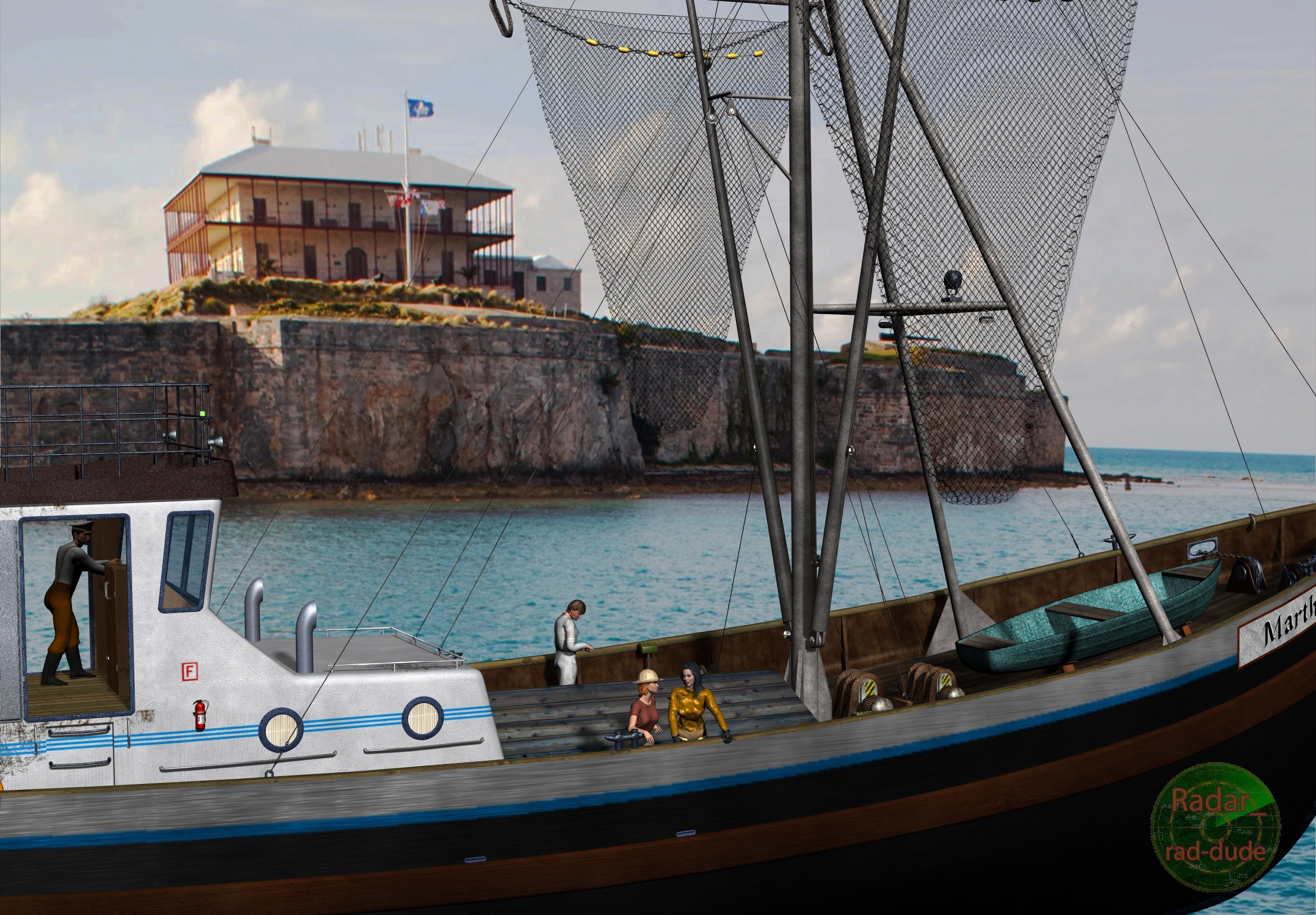 The next morning bright and early, Miss Finche is supposed to meet Mel down at the docks near the hotel. As she walks down the cobblestone street leading to the docks, she hears Mel calling to her. 'Over here, Leticia! Our boat is down at this dock. The captain is anxious to get going. All your stuff has been loaded already. We should be able to leave right away!' Leticia, Miss Finche that is, is startled by the insistence in Mel's voice. She looks down the dock and all that she sees is a seedy looking old trampy fishing boat. Surely Mel can't mean that smelly looking old thing, can she? Mel approaces Miss Finche and motions her to pick up the pace. Now why is Mel in such a big hurry? This isn't really making much sense. Miss Finche is getting worried. What the devil is going on? Is Mel up to something. Mel smiles at Miss Finche as she gets closer. 'I'm sorry about the boat, Leticia. It isn't the greatest craft for exploring the islands around here, but it is a very sea worthy rig. I've known the captain for quite a long time. He has been fishing here for quite a few years in this boat and has always managed to get back to port, no matter how bad the weather might get. And besides, with the little money that Steve gave me, this was all we could afford.' Now Miss Finche is really getting agitated. She knows that her father wouldn't skimp on such an important item as a sound boat for exploring the areas around Bermuda! Her father has always prided himself on how well equipped the expeditions he finances are! Something isn't adding up here. She asks how much Steve gave her for a boat and is shocked at how low a figure it is! 'Why that dirty conniving son of a so and so! I wonder what he has done with the rest of the money that was slated for this expedition. No wonder he didn't want me to come along! I'm afraid our wonderful Steve has some serious explaining to do when we get back from today's explorations!' Leticia follows Mel down the dock and onto the boat. Mel introduces Letitia to the Captain! He seems like a nice enough man. From the way he talks, she thinks he must know his trade. There is only one other person on the boat. 'A rather light crew for a ship of this size, don't you think, Captain?' asks Miss Finche. 'Well, that is generally true, Miss Finche. But Mel here has had me trim my expenses to the bone so for this trip, we can only afford to have on extra hand on board. It should be alright. It's not like we will be doing any fishing so there won't be the need for extra hands. It's just nice to have at least one extra along in case we run into a storm.' Once everyone is aboard, the extra crewman, oh, he introduces himself as Sean, with no last name. Very informal but that is that. 'Hmmm,' thinks Miss Finche. 'What have I gotten myself into?' Soon enough, they pull away from the dock and start heading out to sea. As they leave the bay area, once again they pass the old National Museum building. Mel waves at some body on shore. Might be a security guard at the museum? 'That's an old friend of mine!' says Mel. 'He is a security guard at the museum! I've known him for years! He's a great old friend. Has had quite a full life and has filled the nights down at the tavern with hour after hour of stories of his exploits in the Merchant Marine. He's retired now but enjoys filling in at the Museum once in awhile. I'll have to introduce you to him when we get back this evening.' It isn't long before Bermuda starts to disappear over the horizon. 'And where might you be liking to start this search of yours, Miss Finche?' asks the Captain. Luckily, Miss Finche has a very good memory and gives the main coordinates from the diary to him. 'Alright, Miss Finche!' says the Captain. 'That be a fair ways away from here. Could take us a few hours at best to get there. You gals might want to relax below deck with some refreshments? There is some coffee in a thermos and a box of donuts, that is if Sean hasn't eaten them all by now!' he says with a grin. 'Now Captain!' says Sean. 'Don't be spreading rumors about me that aren't true. Sure and enough, I might have had one or two of them lovely pastries, but I made sure I left a few for... well, later?' and he chuckles as he walks off to attend to something at the front of the boat. 'Lets get to those donuts before Sean returns!' exclaims Mel. I for one could really use one and a nice strong cup of coffee! Thank you for taking a peek! Your support is greatly appreciated!

So Steve spent the money on booze? Strange goings-on ...

The plot as they say, seems to be thickening! Wonder what Mel's game is...

Great job on the scene and the story, Bill!

Superb boat and decor, excellent work on this one again!

A;; around fine maritiome scene. Love the boar.

Too simple - Steve couldn't be such a moron. Mel is up to something more than flirting with Finche... 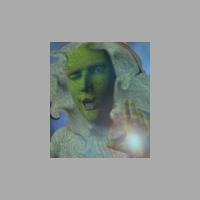 That boat doesn't look too bad, and at least it has a lifeboat on it! But I can certainly see why Ms. Finche is feeling hesitant about the situation. (Sorry I keep changing "Miss" to Ms" but I can't bring myself to refer to a woman over the age of 18 as "Miss"!) I'm sure Mel seemed pretty trustworthy when she first met her, compared to Steve, but now that they're headed out on the boat together, I'm guessing she's starting to have some doubts about Mel. Maybe at the next opportunity, she should call her father and get the financial info straightened out!! Steve has not earned his place on this expedition :-)

Nice looking scene. The coastline looks nice as does the boat! Like how you've framed the scene! Good story!

Pretty good story and very good illustration for it! =)

I have an idea that we're not done with that dope Steve and that we should be a bit worried about Miss Finche's safety. Thanks for sharing, I enjoys me a good story.

Oops, I saw things out of order. The boat looks good enough. Keep an on that Steve.

I may be a bit late to have one the coveted donuts aboard this ship, if Sean has not eaten them already. Just catching up on the story and looks to be going so well as the ship heads out to sea. Now I have to go read the next chapter of this story that you have recently uploaded. Excellent work on the scene, it looks great! :-)

A good solid trawler there, it will get them through the worst of seas. You've really stepped up your game with this story, it's very impressive.

Looks like a sturdy vessel, if not a little "tatty" The girls are bonding nicely and that horrible Steve (I CANNOT BELIEVE I JUST SAID THAT) hasn't given them sufficient funds to run the research trip adequately. Great art Bill!