#4662: They can't find us without these items! by Radar_rad-dude 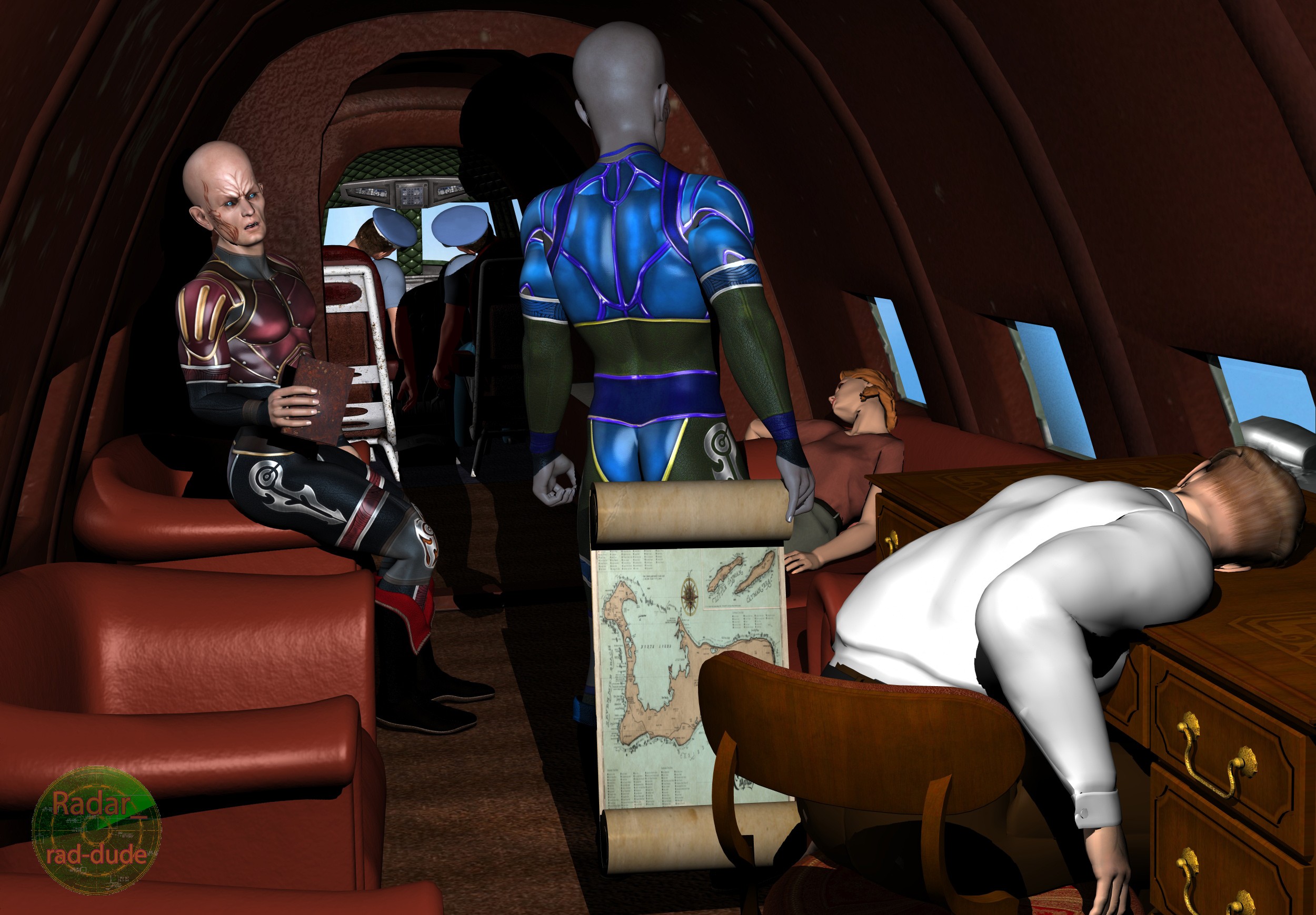 Flying to Bermuda to begin a search for an illusive portal to a strange dimension or alien base, Steve and his (not by choice) tag along partner, the indomitable Miss Finche have run into a little snag to their quest. As they enter the Bermuda triangle, a huge flying saucer is spotted right in their flight path by the two pilots of the plane. Before the pilots can try to dodge the saucer, they are all engulfed in a bright green light. Fans of science fiction will no doubt know this to be a tractor beam. Another effect of the beam is to render the occupants of the airplane unconscious so that two of the members on the saucer can beam over and retrieve something that might cause their race some problems down the road. It appears that many years ago, an intrepid explorer in the mid 18th century was shipwrecked on a small island in the Caribbean. He documented his experiences in a rather detail diary not only retelling his adventures waiting to be rescued but also his encounter with some strange looking unearthly beings. One might call them 'aliens(?)' in this day and age. The explorer only knew them by the name he heard them call each other, the gremmocks. Among the things this explorer recorded in his diary were the nearly exact coord- inates to a very secret cave that held some strange looking equipment he could not begin to understand. He was very careful not to come in contact with these aliens, or so he thought, and observed them over several months before he was rescued. Among the things he witnesses was them coming and going through this portal on a weekly basis. They seemed to be working a mine on the island processing some rocks they pulled out of it. It didn't look like anything precious to him so he didn't give it much thought. He even checked out their mine and all he saw was what he thought was worthless rock and not much else. Once he was rescued, his story about the aliens was brushed off as someone stuck too long on a lonely island making up stories. His diary and a map he made at a later date got lost in his families archives until a few years ago when one of his descendants came across them in an old attic corner gathering cobwebs in a dusty old luggage trunk. Not knowing what to make of it, he remembered taking an archaeological course in college with a certain professor named of all things, Steve! Who would have guessed? Taa Daa. After perusing the pages of the diary and looking at the map, Steve's curiosity was aroused. He made the mistake of mentioning his distraction to Miss Finche one afternoon while helping her assemble some displays for the museum. One thing led to another and Steve talked Miss Finche's father into investing in an expedition to explore the details of the diary. There was only one problem! Somehow, the alien's got wind of the existence of the diary and were finally able to track it down to the college where Steve was a professor. Before they could steal the artifacts that so enamored Steve, he had organized his expedition and was airborne in record time. Only one thing left to do, bring in the big guns and get those artifacts before Steve can use them to find the island where their secret base transporter is! The two aliens beam back to their saucer and once the map and diary are safely sealed and stored away, they release their tractor beam and vanish in a blink. The two pilots quickly regain consciousness before the plane can start losing control and they continue on their journey. But Steve and Miss Finche on the other hand have quite a mystery on their hands. What has become of the diary and map they were depending on to direct their adventure? Neither item is on the desk Steve was looking at just before they lost consciousness! Well, tune in again next time my friends and see if we can find some answers to those questions. Until then, adios and have a great day! Thank you for taking a peek! Your support is greatly appreciated!

Great story and scene! It's like a classic sci-fi movie! Great job!

Fantastic scene and dialogue bill...!!..indeed it has that classic retro Sci-fi vibe going on... Looking forward to seeing more

Lots of fun. Finche and Steve would be the saviors of mankind if they could somehow convince the aliens to whisk away all politicians and their petty functionaries. Then again, the aliens might take revenge by sending them back with even more sinister agendas....

You have done a great job with this exiting story Bill...looking forward to the next episode! The scene looks fantastic! :-)

Steve and Ms. Finch (and perhaps the pilots) will probably have quite the headache when they wake up, and what a mystery that will be, of what happened to the diary and the map! But perhaps, unbeknownst to the aliens, Ms. Finch had captured pictures of both using her handy mini spy camera, so perhaps their journey will not be for naught after all! If only they can find somewhere to develop the film that has airplane-sized parking :-)

Good story, the plot is intriguing and now I must see how it ends. Poor Steve and crew, they will surly have a headache and much confusion, now.

But what if Steve was just reading the Diary of Anne Frank?

Cool image and great story. Hope Steve and company have a backup somewhere or their journey is over. Well done!

I appreciate your story. quite original and entertaining. superb composition

Great story - and an interesting twist! I like those alien outfits.

That Dakota looks mighty luxurious! I hope the team recover! This is really scary. Nice one Bill!

What a great and very interesting story it’s very exciting.... the scene is wonderfully done and this illustrates perfectly the narrative !!

Oh, those pesky aliens - always messing things up! I wonder if Steve and Miss Finch will figure it out, or it will remain a mystery for the ages..

Great job on the story, and artwork, Bill!

Wow! A lot of story packed into this image. XD

I love the "bubble head" aliens; I don't think I've seen them before. Their skinsuits are great, too.

Thanks for sharing, I enjoyed viewing! =)

#4714: Two Chryslers from the sixties