Littlest Wizard in Training by perpetualrevision 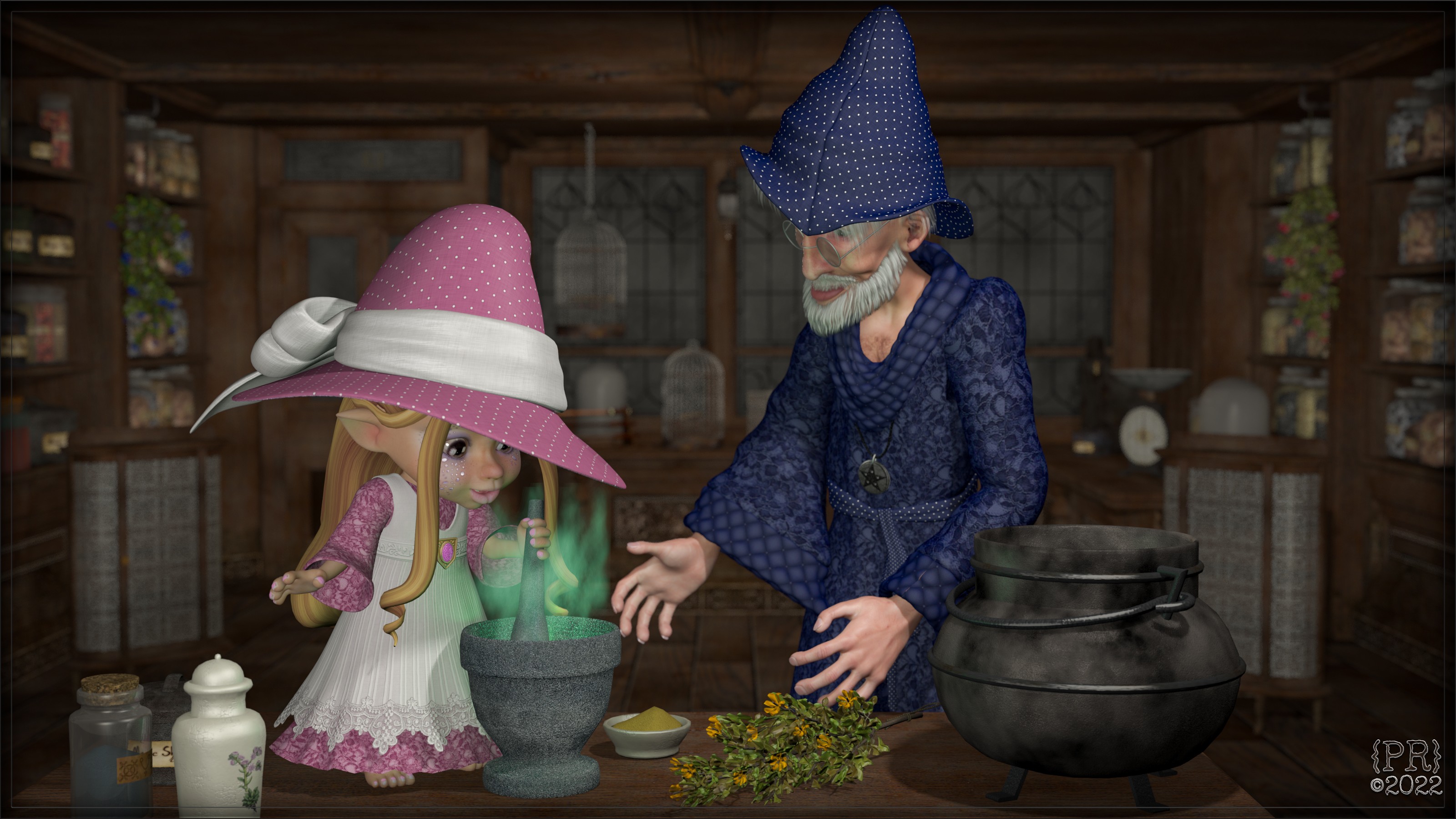 Apprentice Mathilda was only aiming to crush some herbs to add to the cauldron, under the tutelage of her mentor, the Wizard DocP, when a green mist suddenly arose from the mortar. DocP was ready to step in, if needed, but Mathilda had a pretty good handle on the situation, especially for one so young! ==AMY’S NOTES== I’m still kinda foggy from a possible head injury last week, so this didn’t come together quite like I wanted, but I figured it’s cute enough to share :-) I realized after the fact that I had some more "wizardly" materials I could’ve used on DocP’s wizard outfit, but maybe next time! The first time I did a full-size render, I couldn’t figure out why it looked like the shop was full of smoke, then I realized I had DepthCue atmosphere enabled. So if I ever do want a smokey atmosphere, now I know how to do it :-) Rendered in April 2022 using Firefly in Poser Pro 11 for Mac at 3200 × 1800 pixels. DOF enabled. View full size on my blog. ==CREDITS== SCENE: Magic Shoppe for Redhouse Sweet Shoppe. Dried plants, herb jars, and minerals from Faveral’s Opus Magnum. Smoke fx from one of my Messy FX freebies. CHARACTER: Kit figure and Apprentice apparel and hair by Lady Littlefox; Peepot morph set by CDI; Mathilda character by Little Design. Doc Pitterbill figure by Nursoda; Dr Pitterbill Wizard outfit by 3DTM (now DragonFly). Materials on both outfits from Elvenkind mat pack by LittleDesign.

What an adorable little wizard & it looks like she has a great mentor! I'm glad that you decided to share it!

You take care of yourself!

Thank you! I just love using Kit as a little wizard or whatever she is. I started thinking of her as a wizard's apprentice b/c that outfit she's wearing is called something like Esmerelda Apprentice. And of course her little elf ears and chubby fingers and feet make her something other than human. Not sure what, other than cute!

She is so cute. Nice scene. Get well soon.

A very sweet image! She looking like a very intelligent student. Just keep her away from the mop and bucket! LOL! Excellent scene! Very nicely realized!

Thanks for the comment! I think she's probably a pretty quick study. But if I start to hear classical music, I'll double check what she's been up to! :-)

Very well posed and great effects! You always show such tender loving care to your characters and scenes and it shows!

Aw, thanks for the kind comment! I do start to feel like these characters are real people :-)

Thanks! Not sure how this led you to wanting a butter pecan milkshake, but now I want one too! Hope yours was as delicious as it sounds :-)

Thanks for sharing this, I enjoyed viewing. It's really effectively lit although it might have been fun to put a point light source in the cauldron (very dim... maybe 2 or 3% with inverse square drop off) to simulate some sort of energy generating the smoke. Such a fun idea that suggest so many different poses and interactions between the wizard and his cute apprentice!

Thanks, Molly! I actually did do that: there's an inverse square point light inside the little mortar, set to about 5% intensity and green in color. That's what creates the light on the sides of the mortar and on Mathilda's face. (The smoke fx plane has an ambient color, but I didn't render with IDL enabled, so it couldn't have contributed any light.)

I originally wanted the green light to extend further, lighting up both their faces, but I hadn't accounted for the awesome shadowing power of her massive hat, so I had to change direction. Actually, had I planned on the green glowing light from the start, I might'v done many things differently, but that idea came only after most of the scene was set up. I love the idea of the littlest wizard in training, though, so I'm sure Mathilda will have more opportunities to practice :-)

I love the characters. wonderful feeling

so joyful and charming this is. excellent use of props, outfits and characters.

Thank you! I have so much wizard and magic stuff (outfits and props) that I'm glad to be able to use it!

So very fun and so very darling. You do some amazingly fun art for us. Thanks !!!!!!

Thanks for such a nice comment :-) I do enjoy aiming for fun, cute, and/or interesting! I enjoy viewing other kinds of art, but those are the themes I seem most drawn to creating.