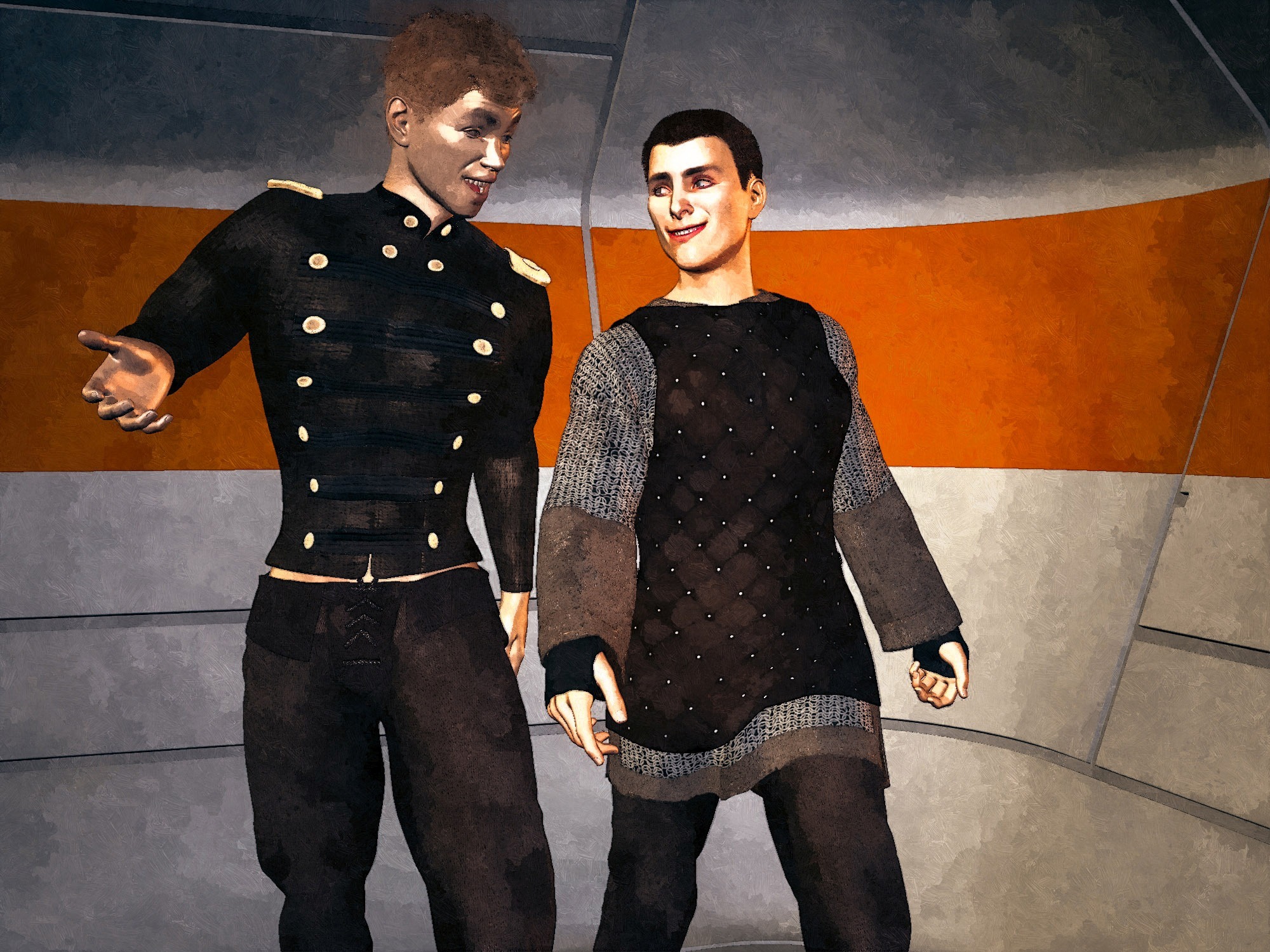 Bay continues his story of Cubes and Kings: Laom Uhrain was the young King of the Tribes of Plenty, a vast region of Southern Tariss, what people now call Throneworld. He was tall, blond and muscular and admired by everyone for his strength. His Father had been at war with the other great power on Tariss, the Northern Kingdom; a vast land of mountains and the chief water source for the Plenty. King Olar Murtom was the new king of the North. He was short, delicate, with dark, short cropped hair. His Uncle had usurped his throne when he was a small child and built huge dams, cutting off the water supply to the Plenty. Young King Olar had been hidden away in a monastery for much of his life. He had only known life with the nuns there. His Uncle Ortis's hunting parties eventually found him and attacked the monastery, but the populace fought back at the atrocities of killing the nuns and priests that shielded Olar and dethroned the evil Uncle Ortis. Now Young Olar was King. Life in the Plenty was desperate and having just assumed the throne upon the death of his father, the handsome Loam Uhrain knew he had to do what ever he could to make peace with the North and get the water flowing to his people again. At a state visit he finally met the strange, reclusive King Olar. In a show of strength, He took Olar on a tour of Star Academy, to highlight in the young man's mind all of the young soldiers he could throw at the North if he had to. During the entire visit, Young King Olar just stared and smiled at him. It made Uhrain very nervous. This King seemed the opposite of him in every way; delicate and feminine, relaxed and cerebral. Uhrain knew his people were dying and the crops were failing. He had heard the horror stories of the wicked and sick games Kings played when forcing a tribute or price on a weaker kingdom from his tutors. The Plenty's armies and weapons were severely depleted and his Father's best troops had failed to destroy the dams that stopped the water from flowing downstream. Olar's strange smile made him wonder what horrible price he would have to pay to get the water flowing again. Would it be something against his Nation, his extended Family, Himself even? Olar's eyes seem to bore into his soul, chilling him. Still, Uhrain tried to be friendly and confident. King Olar looked up at him. "You desperately need the water my Kingdom can provide, do you not?" Olar asked. "Don't lie. I saw the children of your kingdom gathering water from the gutters on the street of your capital!" "Yes!" Uhrain answered. "Your Uncle turned off our supply of water from the mountains!" "Well..Here is what it's going to cost you!" Olar said with a smile. To Be Continued A Cadet's Story previous Chapter (EIGHTEEN): https://www.renderosity.com/rr/mod/gallery/a-cadets-rage-/3041942/ CHAPTER NINETEEN: A TALE OF CUBES AND KINGS-PART 2-THE PRICE Cadet Mab continues to tell Gamon Halt, The Overlord's right hand, why he believes he will soon be killed by the Overlord. Bay continues telling Mab the story of Cubes and Kings. (This part of the story is told in prose form) *********The StarBracer Saga**************** This saga is about StarBracer, a galactic super-powered hero who fights against the tyranny of Galactic overlord Evan Grell, who rules the Zytron empire with an Iron fist of cruelty. Character profiles: Starbracer-AKA Tryon Khrys: https://www.renderosity.com/rr/mod/gallery/star-bracer/3035729/ https://www.renderosity.com/rr/mod/gallery/tryon-khrys-aka-starbracer/3037259/ Galactic Overlord Evan Grell: https://www.renderosity.com/rr/mod/gallery/private-portrait-of-a-galactic-tyrant/3035861/ Princess Zeltron and rebel leader Finnegan Black: https://www.renderosity.com/rr/mod/gallery/at-the-mercy-of-princess-zeltron/3036502/ Our saga begins with the story of a young, eighteen-year old cadet, Mab Elon, who is abducted from his military academy in the early evening and is to be brought to Overlord Evan Grell. Chapter one: a Cadet's story: https://www.renderosity.com/rr/mod/gallery/a-cadets-story/3037079/ **************thank you for Viewing!************

To anyone who reads the story: Thank you! I don't think anyone will guess whats happening next. Maybe no one will care! I will still try and finish the cubes and Kings story. Most of the prose won't be as long as this part. This will be a very short interlude to lay some groundwork. Then I will go back to the comic page stories and finish Cadet Mab's story as best as I can. I realize people in the future might read and I don't want an unfinished story. Thank you for viewing.

Nice work, both in terms of the stage and the writing.

Thank you so much! Appreciate it!

Thanks for that! I appreciate it!

Thank You so much!

Well this is a very very interesting story! I am hooked on this one as well! What will the young Olar want in exchange for releasing water from the dams? Inquiring minds wish to know! Excellent work on this episode, my friend! I love how your mind works! Bravo and many fine kudos from me!!!!!

Thank You so much! I appreciate your comments so much.

Such a great series.

Thank you for that kind comment. i really appreciate it.

As always, a grand tale to be told and great graphics.

Thank you for the encouraging remarks. I appreciate it very much.

Nice interaction! Good lighting on them!

Thank you so much. I appreciate it.

I appreciate that! thank you.

This is Why His Room Was Searched!