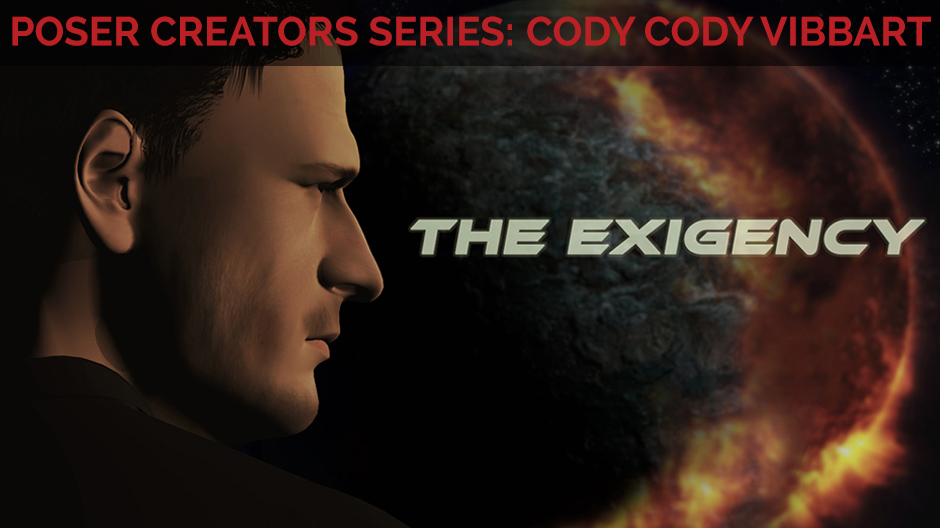 How long does it take one man to create a feature-length animated movie in Poser? If you ask Cody Vibbart, the answer is 13 years. That's how long it took him to finish his 112-minute passion project, "The Exigency."

Vibbart started work on his magnum opus in 2006 with Poser 4, but as the software changed, so did the scenes he was creating. There were parts that had to be redone and some that he had to let be.

But the setbacks didn't stop Vibbart from working on the sci-fi film that follows a retired war hero named Kyle who is forced to return to his home planet, Gallesha, in order to help end a seemingly impossible war with the neighboring planet of Anumbis. Kyle is faced with the consequences of his past while his family is caught in the middle.

You can watch The Exigency at www.exigencymovie.com.

After 13 years, Vibbart isn't stopping after one movie. He's started work on the second part of this three-part series.

He took some time from animating and answered a few questions about The Exigency and making an animated movie in Poser.

How long have you been creating digital art and why did you start?

Vibbart: I've been working with digital art since 2000, mostly focusing on making movies. I went to a local film festival and saw a short film that was animated entirely with Bryce 4. I realized that I needed to do whatever it took to learn Bryce and make my own movie. After learning the basics of Bryce, I learned it was not meant for creating human figures. A few months later I discovered Poser 4 in a magazine article and that's where my journey with making animated films with Bryce and Poser started. I stopped using Bryce after a number of years but continue to use Poser regularly after 20 years.

What inspired The Exigency?

Vibbart: This marks my third animated feature with Poser and I wanted to make something over-the-top and let the imagination run wild. I started with the basic idea of a guy waking up in the morning to find two UFOs flying in his direction. I then came up with the idea of the UFOs targeting only the main character specifically instead of it just being a typical alien invasion. Everything else snowballed from there.

What are the other films you've made with Poser? What are they about?

Vibbart: The first animated film was called "Forsaken" (2001) and was about a plane crashing on an island with only one family surviving. The production time was only eight months. The second movie was called "Silent Hill" (2003), which was an adaptation of the popular video game because I was a big fan of the series. The production time on that film was 18 months. This was a few years before the 2006 Silent Hill film released from Sony Pictures.

Both of these movies were made for personal use, so they aren't available to the public.

How did creating those movies prepare you for The Exigency?

Vibbart: I started making these movies before I really knew the software at all. I only used Poser and Bryce for a couple months before deciding to do a full feature-length film so you can imagine how bad they must be. However, I was learning a lot of the basics of 3D as I was making these movies. It also gave me an idea how long rendering would take and what causes render times to increase.

I had no idea what rendering was when I got into this. Once I realized every frame had to be rendered, I didn't think it would be possible. This kind of prepared me for what to expect with The Exigency but I still made plenty of mistakes and miscalculations. It took 13 years because I spent five of those years going back and redoing a lot of it. The first 20 minutes of the movie was redone completely about six times along with other scenes that were redone multiple times. I guess The Exigency taught me more about time management and the importance of having a solid plan in place before diving into things too quickly.

Vibbart: Haha, yes, patience was a huge factor. I think the patience comes naturally though if you are truly passionate about what you're making. It's not enough to just be interested in making something like this; it almost needs to be an obsession. I used to pay people to take my shift at my day job just, so I could stay home and work on it.

Why did you redo parts of it?

Vibbart: I redid many of the scenes because my knowledge of the programs would improve over time and I'd look at older scenes and know I could improve the quality of them a little more. There are still many scenes and shots that I cringe at but I had to surrender at some point.

What was your workflow in creating the film?

Vibbart: I prefer to work on films as sequentially as much as possible rather than jumping around too much. The first step was planning out the shot and getting the environment in place. Next was character animation and animating every phoneme manually because the automated lip-sync tools never worked well for me. Poser would start getting sluggish with lots of characters in one scene so any crowd shots needed to be rendered separately in layers and composited in After Effects where all the final touches were added. There's a scene with a dining room full of people and that was one of the most tedious scenes to complete. I wish Poser had a crowd-generator similar to the "massive" plugin for Maya.

What's the one trick from Poser that everyone should know about?

Vibbart: You'd think after 20 years I'd know everything about Poser, but there's still a lot I don't know. My biggest tip when it comes to animating lip-syncing in Poser is to create phoneme presets for each character and then modify with the parameter dials when needed while timing it to the sound. Afterwards, I'd clear out the animation for everything not tied to the mouth so you could then focus on blinks, eye movements, eyebrows, e.t.c. It's a lot of work but it is quite fun.

Vendor of the Month - lilflame

Gallery of the Week - MYTHOLOGY GALLERY