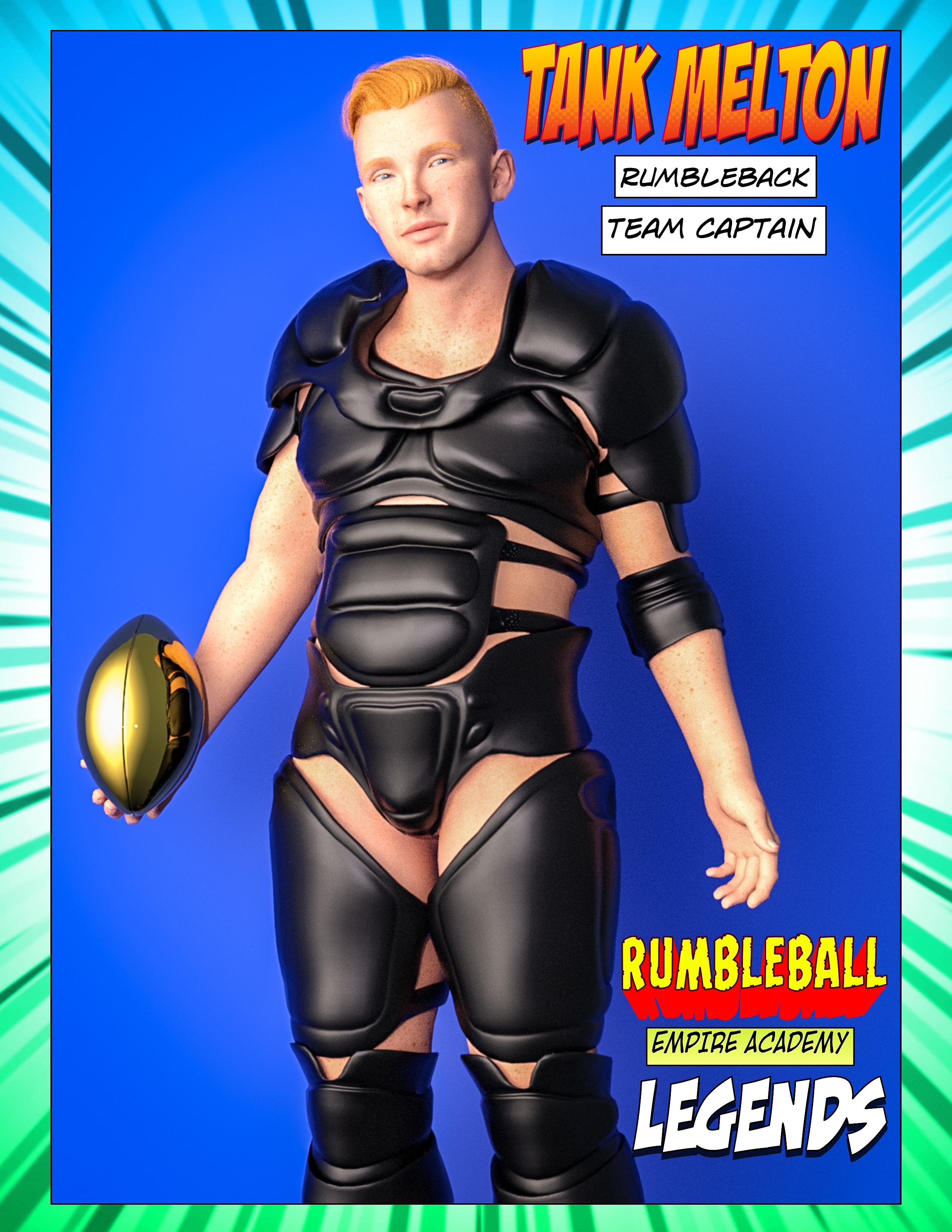 Tank Melton is the jock with a heart of gold. He is a kind, loving nineteen-year old who was on the fast track to graduate early from Empire Academy and become an officer, until he became a central rebel figure in the Hazing Wars Incident. Melton is the founder and leader of ANTIHAZ, a club dedicated to ending hazing and bullying at Empire Academy. He was targeted for assassination until his club protected Goran Koss, a cadet who secretly entered the academy (under a false identity) to investigate the hazing for his father, High Admiral Bullton Koss. Melton now has protected status. Melton is from the planet Meltor ( from which his surname comes), a planet with an extremely hot climate. It's people rarely wear clothing and they have elaborate customs of using gaze as a level of respect. They believe in blessing others with their talk and sayings and believe in kindness and humility above all else, something foreign and strange to the prideful and competitive people of Throne World, where clothing and NOT looking at others are intertwined with social status. Melton is a champion Rumbleball player and Team Captain. His wonderful personality, confidence, as well as his powerful frame draw woman to him constantly and have earned him the respect and awe of most Cadets. Melton enjoys the company of his female fans and calls them his "Babes" and "Cheering Section." These are actually blessings in his mind, as in his Meltorian language they would be considered "great appreciation blessings". He seeks to make friends with Cadet Mab Elon after he hears how Mab protected a fellow Meltonian from bullying. *********The StarBracer Saga**************** This saga is about StarBracer, a galactic super-powered hero who fights against the tyranny of Galactic overlord Evan Grell, who rules the Zytron empire with an Iron fist of cruelty. Character profiles: Starbracer-AKA Tryon Khrys: https://www.renderosity.com/rr/mod/gallery/star-bracer/3035729/ https://www.renderosity.com/rr/mod/gallery/tryon-khrys-aka-starbracer/3037259/ Galactic Overlord Evan Grell: https://www.renderosity.com/rr/mod/gallery/private-portrait-of-a-galactic-tyrant/3035861/ Princess Zeltron and rebel leader Finnegan Black: https://www.renderosity.com/rr/mod/gallery/at-the-mercy-of-princess-zeltron/3036502/ Our saga begins with the story of a young, eighteen-year old cadet, Mab Elon, who is abducted from his military academy in the early evening and is to be brought to Overlord Evan Grell. Chapter one: a Cadet's story: https://www.renderosity.com/rr/mod/gallery/a-cadets-story/3037079/ **************thank you for Viewing!************

Love the sports card look on this image. Is it his rookie card?

Thank you so much for viewing and commenting! This card is meant to represent a physical card of a school sports portrait. Their team is the Legends. On Throneworld and in the Empire in general, its a big craze to collect and own trading cards and physical images of people or media characters. Sort of the opposite of what we are experiencing. Physical images are believed to have almost a spiritual connection with the person depicted . The school makes these portrait cards to raise money for the team. There is a large market at the academy for trading pictures of athletes, and people they admire. The Cadets trade other physical items, like candy or junk food for the card images they want. People believe that just mass copying a card would destroy it's connection, so most people don't copy them and things have a scale of trading value.

Cool sports card design and outfit... the whole thing gives me an 80's vibe (and that's a good thing)!

He sounds like the ideal man! Great characteristics we could sure use in this world right now! Fantastic presentation! Many fine kudos from me!!!!

Thank you so much for viewing and the comments.

Thank you all very much!

Thank you for the kind comments and for taking the time in this busy season to view! It means a lot to me! Bless you all!

Lovely render. Simon Templar with a rugby ball in quite a Sci-Fi sports suit. Wonderful composition and render.
I shall not admit I would like it printed on my T-Shirt.. ;)

Thank you for the kind compliments! If enough people ever love my work enough, I would love to make t-shirts, Etc.