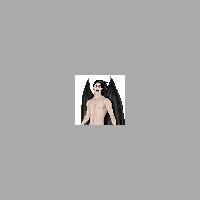 The picture is me in my acting debut as the Saturnian Warrior in the short film entitled: Henry V, Champion of Saturn.<br /> <br /> I live in Desborough in the Midlands of the UK.Â <br /> It all began when I gained Poser 3 from a magazine cover, since then I learned 3D Studio Max thanks to a training placement and I have used other packages but never really found one I was comfortable with until in November 05 I bought Poser 6, Bryce and Shade 8 Standard.<br /> <br /> BIO<br /> I have provided CGI effects for the introduction sequence of the 'episode 5' extra on the BBC Doctor Who: Earthshock DVD (on sale from the 4th August 2003), also produced a large amount of CGI for the semi-pro DVD Advent &amp; the Cheesewoman. Author of several D20 roleplaying game products available at www.appliedvectors.com As hobbies I enjoy roleplaying games both PC, PS2 and pen-and-paper; rock/goth &amp; celtic/new age music with some 'oddities' in there too.