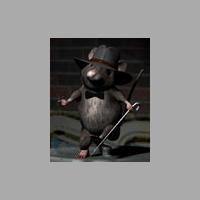 Although I've been a member of Rosity since 2001 and have been posting since 2002 I am still very much a hobbyist artist.<br /> I describe myself as a retired layabout. I'm in my early 50s and I live in central Scotland.<br /> I work primarily with Poser and Photoshop and I guess my abilities with both have improved greatly since my early attempts. I look at some of my early stuff and laugh. I started with Poser 4 and am now working in PoserPro 2010. The tools sure have come a long way. Further than I have. :) <br /> I also stray occasionally into Vue and 3DSMAX but usually to create a backdrop or prop for a Poser image, not to try creating standalone images. That may change when I can get Max to stop crashing when I attempt to render a Poser scene.<br /> Most of my images fall within the femmes and fantasy genre with occasional forays into sci-fi. I love the Steampunk genre.<br /> I don't have any specific method for designing my images. My pics tend to develop from chaos theory. If I throw enough elements on screen sooner or later I'll see something I like and build the image from there. I start a lot more images than I finish, discarding around 75% at an early stage. I find it easier to start a fresh image than to manipulate and tweak something that I'm not entirely happy with.