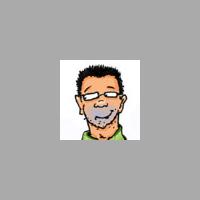 BIOLaurent Antoine, alias "Lemog".
37 years old
I live in France, near Paris... in the Champagne's land.


After short studies of "mechanical and industrial drawing", I left school at 17 years old, in 1982.
My dream is to find a work in a graphics studio, but without any result, yet...
In 1986, this dream became reality, I was hired by a publishing firm.
In 1993, traditional graphics was totally abandonned, now, it's the computer era !
I tried some 3d software, for the pleasure, firstly at home, with
Extreme3D and StrataStudio.
My company makes video film too, it's naturally that I began the creation of 3d sequences,
with Amapi for modeling and ElectricImage for rendering.
And in 1998, it was the begining of a new adventure in professional 3d, we purchased three licenses of Maya !
My dream came true !