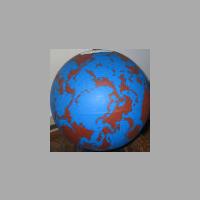 Hello, and thanks for stopping by...the above picture is of my kitty and me...<br /> So, let's see...I started working with 3d art programs around 2005.Â  My dad gave me a copy of Bryce andÂ recently I've switched to Vue.Â  My aim has always been to create a fantasy world that is both realistic and alien, a place people could explore and about which they could wonder.Â  As a young boy I was greatly influenced by Tolkien's Middle-earth, starting, of course, with the Hobbit.Â  As I got older I discovered the Silmarillion and the other books of Tolkien lore, and being already very interested in history, I found them fascinating.Â  It is because of this that I began to do the same, to create a world.Â  Up until recently it had always been of the written variety, with lists of kings, histories, etc.Â  I also love to sketch strange plants and animals, and hope one day to really be able to bring them to life using 3d.<br /> Well, that's about it....thanks for stopping by!

FCLittle posted a new gallery image Savior or the Desert.