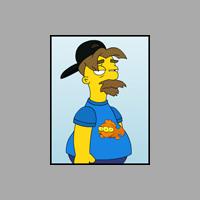 Doug Sturk has been drawing as long as he can remember: on walls, floors table tops. As an only child growing up in the Midwest, he learned to use his imagination and be creative. Encouraged by his mother, a graphic artist, he honed his skills and excelled in art. He claims to have preferred markers and regular scissors over crayons and safety scissors in Kindergarten. Eventually Doug put away his easel and paints trading up for his first copy of Poser... he's never looked back.<br /> <br /> BIO<br /> Doug continued to create as much as possible: award-winning 3-D artwork, landscape photography, Web design and writing. With his work at the former 3D Comic Collective (eventually www.animotions.com) he became well known for his comic book style of artwork. Doug's notoriety increased as he became the Web artist of "Shirtless Girl" on the nationally syndicated "Bob &amp; Tom" radio show (www.bobandtom.com). <br /> <br /> From Bob &amp; Tom - Doug went on to work for various adult erotic story sites... just ask.<br /> <br /> You can still stop by Doug's page at DeviantArt https://sturkwurk.deviantart.com/ and browse through the many different galleries, or just drop off a note and say "hi".