I did it, and it was insane because the first time I ran the simulation, it went PERFECT.

Then I needed to make some adjustments after I rendered it. I'm pretty sure the reason it failed every time since is because I had other stuff loaded in the scene. None of it visible, but it's the only thing I can come with why it kept failing over and over again.

But, I managed to get it to cooperate, and got the drape/shot I wanted.

Anywho, I like this shot. Another user mentioned doing a handstand, and I was already planning this somersault, so... guess I got there first? (grin)

Fiddled with the dome rotation to get the lighting I wanted. And after FOUR HOURS of convincing the shirt to cooperate, and about 6 minutes of rendering... Well, I'm just glad that the second render was all I needed. (My first had the character floating, and black squiggles from the hairset I was using iniitally. I like her better with this hair anyway.)

Later tonight, it's time to load up Cybernoid again. I've had a new idea for it. For now, it's off to get the stuff done I should have done hours ago.

Easy Jeans Shorts for Genesis 8 and 8.1

Sweet pose for this lovely lady! Love her pose and sox! Wonderful works!

Thanks! She was well worth the effort.

This really came out nicely!

Yep. wolandepiphanius had a similar idea. His came our really good, too.

Awesome! Four hours to get it right, eh? I admire your persistence.

In the course of testing and retesting, learning dForce and its oddities, it's most often the hair that makes things a bit squiffy. But, then, handstands... didn't really test for that! Even I am amazed it worked...

Thanks again for pushing the boundaries! Most appreciated my friend.

Not only that, but the starting pose WASN'T upside down. There's 180 degrees of rotation in starting from memorized pose.

I'm still curious why it went perfect that first time, but then wouldn't every time after. Maybe it's a sign that I better hurry up and get the new PC, lol. I'm thinking some of the dforce explosions might simply be from a lack of processing power.

Though it is a 6-core processor in this one. :(

Anyway, I really like the energy in this one. Nepher always strikes me as sassy. I've loaded her a couple times, then had to switch models because she was too sassy for the scene I was working on. So I'm glad this one worked out for her.

The hair in this one, was one of Out Of Touche's. (Everyday Updo 2) The subD, if it doesn't match the SubD on the character, will cause the cap to poke through and make these angry black lines on the forehead. It's annoying. On Nepher, even matching SubD levels wasn't getting rid of the lines. Soooo naturally I added a dForce hair instead, lol.

Thanks! I think between me and wolandephinus, we got the upside-down shots taken care of. 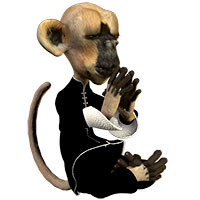 Nice! You beat me to it. I didn't do a handstand though, I did a hanging upside down thing.

It looks great, too! I enjoyed it. This shirt works better than some of the stuff produced in-house at Daz.

That's what makes this stuff fun - and frustrating.... I've had some things I've tried take hours, even days. I've been to that spot many times where I've done everything short of sacrificing small mammals to the Computer Gods... And the only reason I never went that far was because those squirrels are jut too damn fast... 😆

Anyway, you've really done an awesome job on this. Your efforts were well worth the final outcome. And the squirrels are all still OK, I'm assuming... LOL

It would be a betrayal of my "Squirrel Whisperer" mug to cause harm to my little tree-bound friends! Rest assured, they are quite safe.

Blue jays on the other hand...

(No animals were sacrificed in the making of this image)

To bad she had a under garment on. But then again, that did save you one naughty flag mark against your permanent record. Well done and quite fun.

I almost left it off, but then I figured it was kinda better with it. More of a "candid" thing, right? Not saying that ladies don't go around with undergarments, but still.

Your persistence has been rewarded with a very impressive finish here. Lovely work! Oh, I cannot speak for simulated poses over 180 degrees but I do know that when I left the hair invisible, the simulation behaved itself. Terrific!

Def! Never forget to turn off the hair! Thanks for your remarks!

beautiful acrobatics, luckily she doesn't have a dress

I'm both intrigued by the challenge, and groaning on the inside... Hmmm.... Maybe another day!

Thanks for the feedback!

Rayne and Ellis and Jack