Got demon tech? Call in the demon engineering consultant.

This is a follow-up from "Misdirection." ^_^

Having gotten the package back to the Bureau for Paranormal Affairs (BPA) labs, the techs realize that they have no idea how to deal with this thing without blowing themselves and probably a few blocks of Washington, D.C. into tomorrow. Possibly literally.

So they went back to Gotth and Associates, and asked for Jun-oh, who is an engineer from the People. Meri's next-youngest son and Ian's half-brother, Jun-oh is a full-blooded Kitsune of the Chu-sont'rai clan by Meri's youngest wife. Until he scarpered to Earth with the team on the mission to Chidambas, the Oni nation, he'd been part of a tech-exchange with their government bio-engineering labs. Bio-mechanics are his business, and he's very good at it.

What, not a cute anthropomorphic critter? Well, no. He's a real Kitsune, a Rakshasa, not from "hell" but from the far-away demon homeworlds, reachable by Magick and Portals...or if you have a real space ship and a few thousand years to get there. (In that constellation over there. *points* They got there a *long* time ago...but that's another story.) The People (so they call themselves, of course) are transgenic engineering creations that have stabilized their genome, so he has some non-human traits...like his nifty fluffy fox-fur hair and the stripe of fur down his back with the cute "tail" tuft of hair over his butt. Which fits under clothing, thank you. And fangs. And claws. And likes hot, dark places more polluted than humans can stand, generally, since they adapted themselves for their new world.

Anyhow...back to the lab...we're wondering what the heck he's going to find when he digs into that thing...!

Send beer. We're going to need it. It's hot in here. 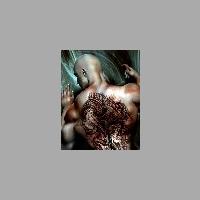 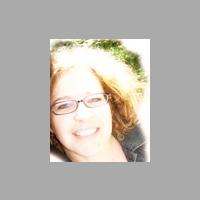 Wonderful and cute character and I like his ears :) Great scene, nicely done.

Thank God he had pants on. :P Very cool image. 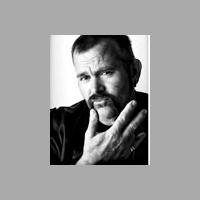 the checkerplate border, the mix of characters, the mist, the light all very nice a strong render

I love his look of concentration!

Agree with all the above!!! Beautiful work!!

Got a case on the way! Jun-Oh is really well done here; from the slightly concerned/confused expression to the little details of the fine hairs on the tip of his ear. I really like the lighting in this one, it adds to the tension you can pull out of this piece-anticipation, maybe? Well rendered and post'd, Nan! I'm looking forward to the rest of the story on how this pans out!