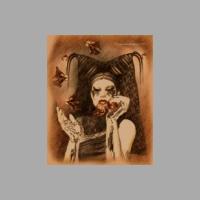 I first started my journey into the world of 3D back in 2006.  I had been using Paintshop Pro for a long time to create 2D images but wanted to try new things and stumbled upon Daz Studio one day and I have been creating images with the program since then. I appreciate an image which has hyper realism but I tend to enjoy creating images with a more illustrative feel, I still use an old version of Paintshop Pro 8 to postwork my images.

I enjoy a wide variety of genres but my first love will always be fantasy art.

I also paint in Watercolours, Acrylics, and dabble with Photography every now and then.

If you breeze through my gallery I hope you will enjoy it.

Elanor knew she had made a grave mistake as she uttered the last line from the passage in the book. That same book now lay heavy in her hand but it could not compare to the weight she felt in her heart as the air became thick and putrid. Animals retreated in eerie silence as an icy chill gnawed and scraped at her tired bones. Rancid air permeated her olfactory senses with the stench of mouldy damp earth and rotting decaying flesh. The acrid stench clawed at her nostrils, reached deep inside her gut and dragged nausea to her throat. Swallowing down the burning bile; she gasped, willing her frozen limbs to move. Elanor was trapped in a silent terror, helpless as her lost love staggered towards her on linguid lobes. Teetering on the edge of gravity, the spasm of his passage almost overwhelms her, a witness to the terrifying monster he has become.

Rendered in Daz Studio 4.8 with 3Delight.
Postworked in Paintshop Pro 8 and Filter forge 3.

Fantastic scene, well composed and with a fascinating atmosphere !!

Steampunk Plague Doctor - The Search For A Cure