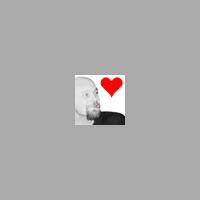 I publish all my images there (and many stories!)

My studio is situated on a ship, my lover Theo is building on the rest of it.

Artistic background: academy of liberal art (5 yrs) and in fashion design (3 yrs). But my work in 3D is completely self-taught.

I love the male body and will never let a chance go by to capture its best pose.

Mouse wasn’t happy. At all.
At the age of eighteen, he was already divorced. And the whole situation made him very unhappy.

He’d loved the boy, with all his heart. He’d given him his virginity, his love, his trust and his life. He didn’t mind him being an ex-whore and promiscuous. Hell, he’d even played around himself, or joined in the fun.
But when the boy suddenly seemed to have secrets from him; a collar with a tag, stating he was someone else’s property and pet, he’d snapped.

That had gone too far. Not only had his ex kept the collar secret from him, he’d given himself to someone without informing Mouse. It felt like cheating… And his outburst had been too much for their young relationship.
He’d broken up. They were married, but he’d divorced. He couldn’t live like that anymore.

Ao Musi was no longer married, and alone. For the first time in his life, he truly felt alone.

His brother, Midnight, had told him off harshly. Mouse had accepted the scolding, it’s what care keepers did when they were right all along.
Midnight had been against their relationship, and was glad it was over.

The smile which had been on his handsome face for two years was gone. Mouse was no longer happy, or playful, and was back to his aloof self.
Again, he was the Ice Queen. Untouchable and bitter, and no longer happy.
The beautiful angel Ao Musi was cold again. Handsome, angelic, gracious and lethal.

The world would be sorry for being so unfair.

(Prologue for my next book)

nice picture and story to go with it.