This is number two of a series of renders to end in a Petcha-Kutcha-presentation about myself.

Here you can see five of my favourite authors/books. Can you name them (two are definitely non-fiction)? 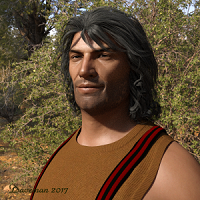 Super coool!! I can only name one of them (a good guess maybe) - Lord of the Rings!? The other I have no clue.

Well, at least you are the first one to try :D The skeleton is DEATH, a popular character in Terry Pratchett novels (you'd probably like his kind of humour). The raven stands for Edgar Allan Poe (Poem of the same title made him famous). The more difficult ones are the six hats, attributed to Edward de Bono's "The Six Thinking Hats", which challenges the European way of thinking in thesis - antithesis - conclusion. Finally GTD is short for "Gettings Things Done", one of my favorites on organisation, written by David Allen. And yes, I like fantasy books, one of them is Lord of the Rings. So one out of five is not too bad.

Rest For The Wicked