At first: Many thanks for the nice comments and favorits of my last image: "Parisian Nights - The Dark Master"
I am pleased with your comments, thank you so much!

Officially should she not stay in Paris, the little Sock Monster Ernestine. But since Barbiel hate to be separated from his beloved pet, he had she smuggled into the hotel. And Trixie should take care of Ernestine, but she just brought the little monster to Versailles. And that's good, because Ragnor could not follow Barbiels track, because the track was too cold and vampires have not so a good sense of smell like werewolves. When Ragnor on Ernestine met, he was a little confused, but he used her skills immediately to ferret out Barbiel (Or rather his socks ...)
So he said: "Search, Ernestine! No, you shall not looking for Ernestine, but for Barbiel!". Actually, he did not know if Ernestine understood him, because sometimes he had to admit, he understand himself not really ...
But Ragnor had sworn that the hell demons can not drag the angel Barbiel back to hell. To rise only about Ragnors corpse, and an undead, especially if he had Ragnors guile and proportions that everyone should think twice ...
Ragnor is armed with the protective amulet "Michael's Shield" and the sword "Hellbent". This make him invulnerable.
So he does not lose Ernestine, he ties her to his thirteen-knot-rope. Since he is from the Middle Ages, it is for him to speak a universal tool, that includes like a tape measure, a calculator and handcuffs. Only practical. Or have you ever tried to tie your enemy with a calculator? A little bit later sees Ragnor fire and shadow, hears a voice. An obnoxious voice. Now he found the bound with hell fetters Barbiel and his tormentor Zaphiel, but they are not alone ...
Ragnor creeps closer ...

Ernestine sure looks like a perfect pet fot this search LOL.. great image my friend :)

Lovely "doggy" this Ernestine :) And terrific look for Ragnor

A good read as always and the image is stunning work

Ragnor bloody outfit is incredible and the effects on the swords are superb! and his "sock" searching pet is very funny ! Your imagination always amazes me, Elke !

Ragnor looks great here Elke - like a proper heroic warrior covered in blood. He has been doing his job! Ernestine is so cute. I think it is unanimous, we all like her! Wonderful story and humor in this as always. Love your stories and images hon :) The amulet and sword look fantastic too.

your welcome, just keep up this series and great stories. nice blood fx and glowing weapon.

A lot of blood in this one but great performance like always Thanks for your comments on my work And surely you are a great LADY.....((5++)) 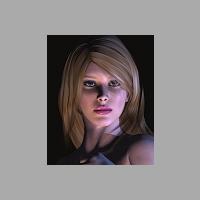 A delightful pet, and a glorious Ragnor!

Sock monster? That is one adorable pet..Great scene and story! 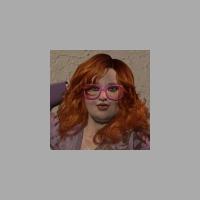 I'm guessing one would not want to mess with either of these characters....

lol do not mess with them. cool image