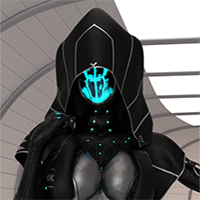 Mattia sensed the raw power in this one and knew that she could be a useful addition to her cause, however the one calling herself 'Silk' was extremely stubborn. "I am trying to do this the easy way, but you are making it very difficult", the sorceress explained to her downed adversary. She did not want to damage this one any more than necessary in order to get her compliance, but sometimes you had to break a few eggs to make a meal of some kind, or something like that she was not much of a cook.

As fast she was, Silk could not seem to get any kind of advantage over this intruder. Not that she had any kind of chance to use her speed, strength or anything else for that matter. From the opening bell she was on what she would very generously call 'defense', but basically it amounted to her being on her hands and knees trying to recover from each attack. Silk could hear the words that were being said to her, but for some reason her mind was having a very hard time keeping them in a recognizable order. Every time she thought of a reply, it seemed to drift away from her grasp like an unmoored ship in the night. If she didn't come up with some kind of offence very quickly, Silk would have to put this one down very firmly in the 'L' column, and a big L it would be.

Mattia knew exactly what the hero was going to do next, she didn't live for over 1300 years without learning a thing or two about body language. Also the fact that she was working on improving her modest abilities to sift through her opponents thoughts, easily seeing what they had planned next. Occasionally she would plant suggestions for them, making them think that they had come up with a new plan, but that was only when she was feeling playful. Today was not one of those days, and Silk was trying her patience. "This is your last chance Silk, submit or I will be forced to remove your ability to resist", she commanded.

"Frick that", Silk said to herself as she desperately tried to think of a way to retreat from this fight that she could see was hopeless. "If I can just get a web off, I can get some space between us", the hero thought while simultaneously aiming for a point far enough away to accomplish that.

"Ah well", Mattia sighed as she delivered a lightning charged assault on the determined girls brain. This would unfortunately render her unconscious for longer than the sorceress wanted to wait, but she could see no other choice with this one.

Silk shot her web and at the same time felt her head explode with the sudden barrage of psychic and electric energy being forced into it. She blurrily watched her web dissipate into harmless strands before it had any hope of reaching its target. But even that small setback faded quickly away from her concerns as her mind began to shut down to protect itself from the dual pronged attack that she only had a rudimentary defense for, and that was smashed aside like a leaf in the wind.