Granted possession of the Singularity Harness, Temporal Displacement Engine, Tempuscope, and the Reyburn Mark VII Light Wave Pistol (aka The Gatekeeper) by the members of the Academy of Forgotten Arts & Sciences

When it comes to careers, everyone has to start somewhere. For Lady Aleksa Krane, her reputation as a ruthless intelligence operative was built over years of service to the Sovereign Empire. But, she wasn't always that way. Her career and rise to prominence among the Sovereign began the way all great up-and-comers do -- at the bottom.

Carrying an important message from Sovereign Emperor Frederick III, Lady Aleksa Theodorine Krane arrives at the mountaintop refuge of Lord Longfellow. One of a handful of Sovereign royals who openly oppose the Emperor's expansionist agenda, Lord Longfellow's reputation as a dissident and supporter of the Free Peoples Collective makes him a most dangerous man amongst the Sovereign. Who better to deal with him than the Imperial Intelligence Bureau's newest operative, Lady Aleksa Krane?

This special digital feature will be published daily in two-page increments on The Airship Andalusia's Facebook, Instagram, and DeviantArt pages and will be included in the upcoming digital and print release of Polonius & Penelope. Enjoy! 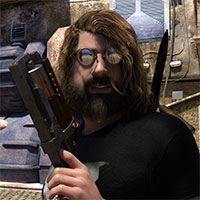 Errand For The Emperor - Garden Stroll

Errand For The Emperor - Fashion Advice

The Frost Heart - Orders are Orders

The Frost Heart - Making The Rounds

The Frost Heart - Dancing In The Dark

The White Arcades - On The Ridge

The White Arcades - One Handed