Life Downside Up Origin by Pixy13 ()

While doing this I created my first two characters

Evelyn an early 20's petite redhead, originally designed to be a fairy but eventually I ditched the wings and just made her a small human.

Evelyn got an unintentionally written short story called Sleepy Hollow, while Fae was developed for printing purposes. However I had planned to do another short story for Fae, pitching her as a bipolar and depression suffering girl.

Over Christmas a few ideas were rolling round my head driving to and from work, eventually I started to save them as draft emails to myself. 3 months later I compiled them all together and discovered around 100 pages of text written for Fae's story.

After printing them all off, I started to arrange them and compile them into chapters and it soon became something far larger than I anticipated.
Originally I planned to do a 20 pages story with artwork but it became obvious that there was far more to this story than I had conceived.

Currently standing at around 300 pages of text arranged into ten chapters, Life Downside Up is a story about Fae's struggle with her own mind and lifelong battles with depression and bipolar disorder.

Thank you very much, I do love this one :) 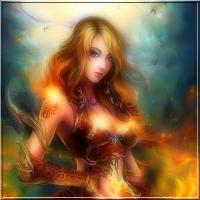 It looks amazing. Thank You very much! I wish you creative inspiration and potential! Well-being!

Thank you Lita :) Same to you too, never stop dreaming!

I Believe In You

Nothing Worse Than Being Right