There'd been a large scale brawl involving an unknown number of men but it wasn't much of a fight now, more of a beating since one side had clearly come out much the worse. Four men lay prone on the floor, on the receiving end of kicks and punches whilst their one standing comrade was surrounded and taking heavy blows from his enemies. Before Klane had time to assess the situation further, a commanding voice was bellowing over the turmoil to make himself heard.

It was Muttu at the head of the Southern Pralannians and his word seemed to carry weight with the victors for they broke off with cries of derision and shouts of laughter. Klane went over to one of the fallen men who lay groaning on the street.

"Can you help me get to my brother's house?", he asked. "He's the blacksmith for Ironhope. I have to speak with him!"

Muttu frowned when Klane offered support to the wounded man as he struggled to stand.

"It'd be best for you if you stay out of this quarrel", he advised. "Don't get mixed up in what you don't understand!" 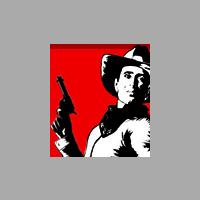 Nice text and good scene. I'm not in love with the ground and background, because they don't have the same clarity and sharpness as we see in the figures. But, nevertheless, this is a nice image and it does make me want to know more about the story. Well done.

Thanks for your constructive criticism and I think you are probably right. I was going for an artistic effect which sometimes works when the blurring of the background emphasises the foreground figures to give them more "punch", particularly when background and foreground colours are similar, so this was deliberate post work (it also serves to mask some things I didn't like in the ground texture). However, I think the technique I used to obtain the effect was a little flawed and has resulted in some uneven blurring. Also I think it is an idea best used sparingly lest it becomes a cliché. I might do something similar again at some point but I'm not sure its worked here and I will give it a rest for a few images. As for the story there is an album of all the old Klane Kalonia images with his adventures thus far of which this is the third. There's been a long gap in the middle of telling this story due to a combination of circumstances and an artistic block but I can feel the ideas flowing again and intend to complete this episode at a more reasonable pace now I've started again!