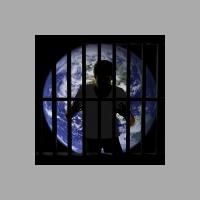 Before Jen Jen knew anything about the future, she was quite the accomplished little gymnast.

District Gold Medalist. What a breeze.

The Wheaties box was destined to be hers.

But then? She got screwed at Nationals when some other girls at the meet put laxatives in her breakfast shake and she pooped
herself on the balance beam.

But try and prove it. That's the problem. But that's okay. She knew where to find them all. And sooner or later? Even after all
these years? Jen Jen would have her revenge.

But first she had to get back to the present. And all the years of hard work and practice honing her balance and swinging on the bars
paid off well as she scaled this monstrous structure to smash the glowing blue thing on top of it if she could. It was her last hope.
The rest of this damn thing was indestructible.

She couldn't have possibly known that at that very moment, eighteen years in the past, my Vickies and I activated our own time
machine creating a looping vortex in which Jen Jen herself became the anomaly in time, a physical presence corrupting the flow
of time, like a bathtub stopper clogging the drainage of the past into the future.

Aha pigytails and the funny hat. Who's with Jen Jen? Nice one ZZ, like the story tellin. Can't wait on the next one.

haha... What a story James =).... Still laughing. Wonderful series of renders to go along with the story.

Oops. Big oops. Love the foil hat and pigtail's expression. Is she merging with your companion or the badguy gal below? Where did she come from? Great chapter. Love the 3 images

OMG!!!! OMG! Let me just pick myself up off the floor!!! James. These images looks so much more than perfect!Your imagination never fails you Bravo on this glories chapter my friend. Take care cheers

That does not sound good. There will probably still be great trouble.

stunning scenes and splendid details! funny story and surprice of the machine 😃

Laxatives in her breakfast shake....... Sounds like a Tonya Harding kind of thing.... Well, I guess it's better than getting whacked in the knee with a stick.....

And now she's become the anomaly in time - and got a new hairstyle to boot! things are looking up for Jen!

excellent graphics and use of props. Mr. Tin head is funny also

Miss Me Miss Me Not

"HAHAHA! You missed me!"

Should Have Gone Shoplifting

And Jen Jen Liked It