Too hot today in NYC to play outside so...

Thanks for the view and for any comments you'd like to leave...greatly appreciate your support.

An atmospheric urban scene whose environment seems to have been inspired from the Spanish Harlem or the Bronx. I also like the colour selection you've done in this scene, where the heroin is colourwise simply a part of her own environment, a simple element of it. Wonderful artwork !

just totally amazing work on this urban scene Barb. really love the city setting and tremendous lighting. i like that robot or bike, can't really tell which. but love it. yeah going to be a scorcher here today also.

Super image. We have had a thunder storm & rain dancing off the ground.

Well, it looks a bit hotter here! Not gonna annoy this lady!

Cool image G, I like the bot friend! I can upgrade that crowbar to an ion plasma energy blade if you like, for a price of course... 🐉

The use of so much blue in this scene really works; the night-time atmosphere is gorgeous.

This is awesome. She looks realistically tough. Great lighting. 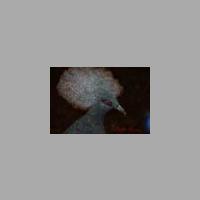 Great noir scene. She doesn't even need the robot to make her statement.

Excellent composition and the cool color scheme is a welcome sight on a hot summer day. 😅

really gritty cool spooky urban night scene. All of us who've lived in urban centers know these streets well. Love the blue tone, and the contrast in those bright signs. And the grit; and that---what---cycle? that vehicle? (I'll take one, if they're cheap.) Adds real color as well as looking like it's alive. She's ready with a crow bar I wouldn't want to tangle with, and she's relaxed too, which is worse 'cause it means she's so confident, she can take on anyone. I really like the perspective too--the tilt of the facades behind her. And the "wet" feeling. Terrific.

I'll do one more for now, and return later. And re the heat you guys had: I can't believe Chicago has had cool temps while the rest of the country baked. I don't know why we were spared. I hope things are better there now...hot New York summers can be scorchers...stay cool.

Pride on the Green

Pop's Day at the Beach

The Lure of Wings