The blaring alarms went silent. "This is a good thing, right?" Prime asked.

"No. We have a systems failure cascade. The collapsar drive is losing alignment and shutting down. We're going to storage power and losing much of the ship's internal environment stability." Beta frowned. "Of course, that means you should..." Before the science officer could finish the disc began to tumble and the artificial gravity shut down. The bubble of stability that was the ship's internal environment blinked out of existence and the occupants were tossed helplessly around the cabin.

Molly's art notes: A little retro sci fi for a change! Set up and rendered in Poser 12.0.500 using the Superfly Cycles 2 rendering engine and then tweaked a bit in Photoshop (mainly to add a subtle vignette). The background is Flink's Stormy Skies product and the ship is Cybertenko's discplane with a few material tweaks (I didn't like the glass in the dome). The storm is one of Flink's wonderful sky domes. The characters are all DAZ generation 3 dollies: V3 improved by Blackhearted's GND 2 morphs and textures, SP improved by Blackhearted's Irina 2 morphs and textures and Aiko 3 improved with some stuff from DAZ. All of the character textures were optimized for Superfly with Snarlygribbly's EZSkin 3 (which doesn't work in Poser 12 so I had to boot Poser 11 to use EZSkin; I so hope someone will update that script!). The uniforms come from an unknown source and are called male comic overlays. There's a lot in the Poser library from more than 15 years ago that my husband got from I don't know where.

The Girl Next Door 2: Athletic 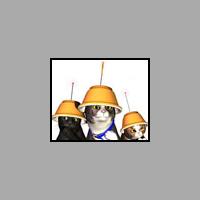 Impressive scifi image. Never would have known these were generation 3 if hadn't stated it. Love the brief dialogue and the story

Thank you so much for your comment! I mess a lot with lower mesh early figures for the variety they bring to my pictures and also they are a bit easier on my hardware. They have limitations but most of those can be overcome with retexturing. I hope you'll continue to enjoy the story and pictures. It's easier to follow the story at my Deviant Art site.

To be a grown up