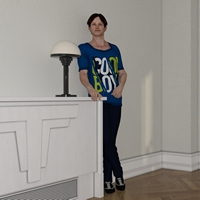 This was my tenth piece of artwork that I created in 2017 which was created with Daz Studio Pro 4.9 on 25/01/2017. The artwork is based when I was sixteen at Caldwell Hall School in Derbyshire, I was at Caldwell Hall School from September 1982 to July 1982, the school was near Swadlincote in Derbyshire, the artwork is the third part of a series called Childhood Sweethearts

The 3D scene took me about a hour to set up, pose the figure, adding lights and setting the angle and viewpoint of the render viewpoint camera.

The artwork took Daz Studio Pro 4.9 2 hours to render from a 3D scene into a 2D image.