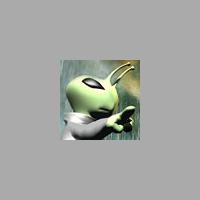 BIO
Started in 1981 with graphical simulation of industrial robots - part of my studies of math in Stuttgart (Germany). Then, by accident, 1984 Bavaria Film asked me to do computer animations for Enemy Mine (director Wolfgang Peterson, produced in Munich, Germany). That was my start into the more creative part of the business. From there on til 1991 i worked as an animation designer with several sorts of software (BTS FGS 4000, TDI, ...). We did commercial animations but tought students (from the Stuttgart Academy of Art) as well (half-half). After that i had the opportunity to make a move into event and "classical" design business. And there I still am - doing mostly print design in a little agency I am running with some friends. I kept always an eye on the 3D business, but only with the appearance of Vue d'Esprit on Mac i found a sort of way back into 3D graphics. This software for me is the ideal combination of easy-to-use and quality results so it was great fun to work with from the first moment on. Let's see where this all will drift to - who knows. Walther Beck