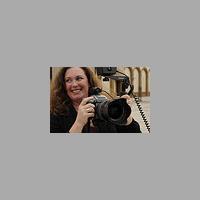 I've been taking pictures since I was a very young girl using whatever camera mom was using at the time. When I was 16 our family met another family who had relocated from England. Their son was a photographer and soon after we met I was cashing in my bonds from grandma and purchasing my Nikon FM2 (which I still use). After graduating from high school I started doing other things and the photography took a back seat. Almost 20 years later two professional photographers entered my circle of friends and they inspired me to pick up that camera again.  I don't know yet where this is taking me but it's a passion that's driving me into the unknown. For now though I'm just so happy to be creating again and I love this site and all the kindness I've been shown in here. Renderosity ROCKS!!!!!!!!
On a personal note I'm a stay at home mom to four kids which I adopted and who are the willing subjects of many a picture LOL. Also I now have an awesome step son.  There's three grown kids out in the world too and two grandbabies ;-)  YUP we are busy people!!!!
The goodies in my bag: