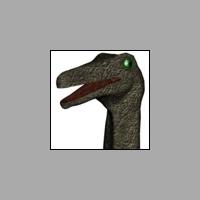 Previously a Staff Cartoonist at Renderosity, with my 3d, weekly comic "Non-Canonical," and also a Contributing Columnist at Renderosity with the quasi-monthly comedy of "View From Lobeville."
The last few months I have also been trying out a new camera at various locations. I was very lucky to be able to shoot professional model Julie Simone in early November. I have so many great shots (mainly because of her talent and Nikon engineering) and have been posting those to my gallery as fast I can.


The Raw Facts!
I'm in my mid-40s, living in Northern Virginia, and my current profession (using the term loosely) is as a technical writer. I have a Ph.D. in physics and for almost a decade after graduating did research in astrophysics. (Mainly radio and X-ray observations of BL Lacertae objects, quasars, and radio galaxies, if you really want to know. I didn't think so.) Now I work as technical writer for software companies where my main interest is in the graphical display of information.
An AnteriorLobe Fun Fact!
My favorite personal fun fact is that in 2000 I had a tumor which wrecked the anteriorlobe of my Pituitary gland. Turns out brain surgery is not the fun filled romp I was lead to expect by reruns of TV shows made in the 70s! Where was the final, positive resolution before the credits? Sure I'd have to learn something like "always be yourself," but so what, I'd be totally cured. I'm still waiting television! On the other hand I do have a very small titanium plate in my head, and they didn't have to drill into my skull to put it there - so there is that.
Writer
These days I think of myself primarily as a writer. Really. Will you stop laughing?
Technically I actually am a professional writer, that is, people have handed over real cash money (well, checks) for about two-dozen non-fiction pieces on ancient history, and one work of fiction, a long, long time ago. A spy fiction magazine funded by Bob Guccione in the early 1980s accepted three of my stories -- I was on a roll! Finally, about a year later the first of my cold war tales appeared in print, a thrilling battle of wits in East Berlin... and... uh, that was the last issue of the magazine. Drat.
3D Graphics
Since 2006 I have been experimenting with the combination of writing and graphics. (Otherwise known as comics.) I create 3D, computer-generated graphics mainly I think it's fun and when done well they look very neat. Also I can't draw. I wish I could draw, my personal theory is that this can greatly improve the construction of abstract works, but, what can I say? Well, I guess just that "I can't draw," but I think I've established that by now.
Photography
Someone asked me recently if I was a photographer -- someone who didn't know me, of course -- and I replied, "I have a camera." That basically sums it up. I have a Nikon D40, a very nice introductory SLR, so I have the technical capacity to take actual aesthetically appealing pictures. The extent to which I do is really hard for me to say. I normally have a tough time judging my own stuff, and I have a really hard time with my own photographs. Are they good, bad, great, mediocre, or just a plain embarrassment to the Bayer filter and charge-couple devices everywhere? I have no idea.
Non-Canonical is a weekly, 3D, computer generated webcomic about the adventures of Victoria and her dinosaur pal Gallimimus as they try to run a low-budget TV station while interacting temporal rifts, rampaging robotic fish, super-spy rodents and the plots of Evil Vicky. "Non-Canonical" is a comedy with an absurdist twist, where the presence of talking dinosaurs is taken in stride, and the occasional trip to transdimensional space is primarily an annoyance. The strip is filled with odd references to an odd range of topics such as the Marcomanni Kingdom, Video Toaster software, and Cthulu.
Non-Canonical is rendered with DAZ Studio and Bryce, with Wings 3D used for a few bits of modeling here and there. Soon, I may try Cararra or Hexagon for modeling. I'm sure you're exciting to know that.
Non-Canonical is actually my second attempt at a 3D comedy comic (don't ask) and I am working on what I hope will be a more dramatically intense and sensible comic (really): <i>Ayliana Zure,</i> although I am approaching this slowly. I may try to put together for one or two sensible, but short comics before trying for <i>Ayliana Zure.</i>
(At the moment Non-Canonical is on hiatus, but I hope to get back to it by late summer or fall of 2007.)
The View From Lobeville
I'm also a contributing columnist at Renderosity, with "The View From Lobeville" showing up about every three weeks on the front page of Renderosity. These columns are filled with my wacky and hilarious observations about artistic inspiration, web shopping mania, and (coming up) my photography "career," and lots of other topics.
I should say that I <i>hope</i> these are hilarious -- I'll settle for mildly amusing. I tend to skate right along the boundary of "comedy" and "stupidity" and it's just hard for me to know which side I'm falling down on. (I can't skate see, so... oh, never mind.)
(Like Non-Canonical, The View From Lobeville is on a bit of a hiatus at the moment. Hmm, maybe I should write something about being on hiatus.)
The Semi-Official Bio My life so far has changed (roughly) each decade.

1960s: The Kid Years. Grew up in upstate New York. Nothing exciting.
1970s: The Slightly Older Kid Years. Still in upstate New York. Worked summers at the Saratoga Race Track where, to put it mildly, I was unimpressed by the "sport of kings."
1980s: The School Years. We have college (where I did fairly well), then 2 years of grad school (where my grades were extremely mediocre), and 6 years in another grad school (good enough to get a Ph.D. which means...I'm not sure.) Majored in physics at all these fine institutions, and did my thesis in radio astrophysics.
The 1990s: The Science Years. Most of the 1990s were spent in astronomy. The first two years were spent teaching. I learned a lot from the students, mainly that I don't like teaching. I spent six years as a postdoc and then two years at a Giant Research Facility. From a career standpoint my time as a postdoc was the best -- too bad I didn't realize that until years later. The research I did involved bunches of radio telescopes, some earth-orbiting satellites, as well as papers and conferences. I got to look at things very, very far away - galaxies which are sort of like quasars except, well, they aren't. I'll spare you the details.
The 2000s: The Corporate Years. At the end of the 1990s I switched out of science and we moved to Northern Virginia were I got a job as a programmer for a mid-sized consulting company. Fairly quickly I realized that I was bored and so I evolved into a technical writer, in charge of manuals and other random documents. The tech boom years were great in many ways, but we all knew it wouldn't last, and darn it, it didn't. I also worked for a start-up, a large aerospace company, and a number of small software companies. Overall corporate life has been fairly easy, although a brain tumor in 2000 added to the excitement.
The 2010s: The Small Years. It is only 2007 as I write this, so we're a bit early for another decade change, but so far, well, I've had better decades.

Want the very latest on anteriorlobe? Oh. Well, in case you change your mind feel free to check out anteriorlobe.livejournal.com