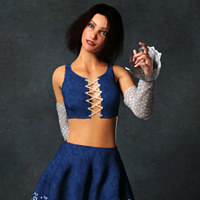 I did a modeler conversion of V4's Sojourner to La Femme here. I have Crossdresser, but when I purchased and installed the La Femme module, Crossdresser simply quit working and requests for assistance have gone unanswered for months.

I believe converting in the modeler instead of a conversion program is the better choice anyway. Granted, if you don't have modeling experience and rigging experience, this path isn't likely for you. I convert the product to a base object file, fit it properly in the modeler, then export, re-group and rig in Poser for the desired figure. This specific conversion was easier than I anticipated and only took about 5 hours from export to rigged and rendering, with 5 pieces to the set. The advantages are 1) weight mapped rigging done correctly; 2) even hard to convert object like shoes convert fairly easily in the modeler; and 3) last but not least you don't lose UV mapping, so the original textures work beautifully.

I used Grace by Dragonfly as the LF character, Arion Hair (a modeler conversion of DAZ hair) converted to Poser, Renderosity's April Prime Freebie, The Fairie Pond, and Songbird Remix Birds of Prey 3, Male Osprey as the subject of her attention. Lights are Afrodite-Ohki's WIP Superfly lights. Rendered in Poser 11 Superfly.

Thanks for the info on the conversion. I have just enough modeling and rigging experience to be willing to take on projects like these, but I might not have considered it for a more complex outfit like this. But your comments are inspiring, to me and hopefully others! And the render is beautiful, too!

Thank you! Conversions aren't typically hard to do, just take some time and dedication. If you want to try some and want help, drop me a sitemail and I'm happy to help and/or answer questions.

The biggest hint I would start with is start with a small set - 1 or 2 objects - and go slow.