Be the Trey (AKA Beowulf Rudolf Constantine von Yeti III) continues his blissfully lonely patrols of the Realm. Here in the low lands, farthest from Ma Yeti, he could ride his beloved horse or start training the Lipizzanalama babies. But walking takes longer and gives him a better idea of the lay of the land and provides the opportunity to interact with the citizens.

But what to his wandering eyes does appear when he strolls up to Temple 39Q, but a lovely fan dancing Yeti Sheila! Be freezes in his tracks. Goodness she’s pretty!! And Limber.

The pixels are totally disgusted to find themselves in yet another Yeti/Sheila render. Gloomy temples, more Yeti hair than you can shake a stick at. Sticks and Pixels is a bad combo. They run with sticks if they can’t find scissors. And sword fight. And poke things that don’t need poking. In fact, Pixels much prefer to stab things with sticks, rather than shake sticks. St Pixels has ordered another gross of glass eyes and is in the market for pixel sized seeing eye dogs. Ma Pixel wonders if pixels need to see to be seen.

Rick is right, I couldn't have said it better.
The skills, the composition and render, the outfits and the assets, everything is outstanding fabulous brilliant awesome.
A most brilliant awesome, magnificent Masterpiece of Finest Arts. I love it!

Excellent! ;-) I think Ma Pixel is on the good track.

I bet there is a team of at least three stylist's to keep all that hair looking red carpet fine, lol... ;)

A lovely dancer with grace and poise.

LOL! This is delightful!

thanks for the great humor in this.

And there she is!! i did not realize she was a temple dancer, a far more elevated profession than a folies dancer! The qualifications increase! :D

Fantastic image my friend, love it!!! Unfortunately my PC is broken! That's why I'm sending you beautiful Easter greetings from another PC today. Hug Elke

donnena you have out done yourself this time, beautiful work !

Oh hon, this is what happened with the lockdown, we all need a good shaving now :D

Wonderful and fun as always, my dearest!

Love those lush fans mixed with that heavy hairy coat---makes for a lush, rich, hairy opulent presence. The salmon-tinged yellow feathers are fine contrast to Sheila's many grays. And a great headdress too. A real flourish of an image. She stands out against the old sooty walls of that background temple/castle, etc...

Love an artist who can think outside the box! who ever knew a gorilla can be so appealing! I love this! you can be a 1920s goddess no matter what size..shape...gender or species you are! very creative! well done! x 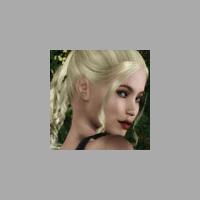