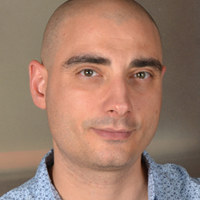 Tasos Anastasiades is an Assistant Professor at the European University Cyprus.
In 2004, he started publishing "Plastic Comics”, the first comic book series created in Cyprus. In 2014, he illustrated the graphic novel titled ‘Fascista’ and became a publishing partner and contributing artist at the first Cypriot comic book anthology titled “Current”.

Tasos has been involved in numerous cultural events and in 2017, he was selected by the Cyprus Embassy in Romania and the Cyprus Ministry of Education and Culture to represent his country at the 5th European Comics Festival organized by the European Union National Institutes for Culture (EUNIC). In addition, he is a webinar instructor and artist at ‘Digital Art Live’.

His latest project is the creation of the graphic novel titled ‘The Traveller’ which was done in collaboration with Neil Gibson publisher of T-Pub comics in London, and editor of Stan Lee’s last comic ‘The Luckman’.

The Guardians of Europe

The lost Queen of Egypt