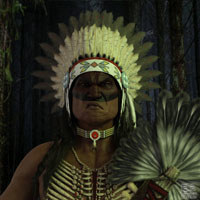 I have always been around art. My father was an art teacher, then a fine art restoration specialist. As soon as I was able, I picked up a pencil and tried to mimic my fathers work. My mediums are pen and ink, painting and airbrush, graphite and charcoal, sculpting and carving, model kit building and of course digital creations. My influences are, da Vinci, Michelangelo, Thomas Moran, Remington, Russell, Frank McCarthy, Old world artist, Salvador Dali, H.R.Giger to name just a few. I love fantasy, sci-fi, realism, abstract, landscapes and tastefully done nudes. My musical influences range from Tchaikovsky to Tool. I am also a drummer like my father. I hope that you enjoy or at least are moved by my artwork in some way. Thank you for your interest in my background. CHEERS!!!

The Chatti (also Chatthi or Catti) were an ancient Germanic tribe whose homeland was near the upper Weser (Visurgis). They lived in central and northern Hesse and southern Lower Saxony, along the upper reaches of that river and in the valleys and mountains of the Eder and Fulda regions, a district approximately corresponding to Hesse-Kassel, though probably somewhat more extensive. They settled within the region in the first century B.C. According to Tacitus, the Batavians and Cananefates of his time, tribes living within the Roman Empire, were descended from part of the Chatti, who left their homeland after an internal quarrel drove them out, to take up new lands at the mouth of the Rhine.

A practice, rare among the other German tribes, and simply characteristic of individual prowess, has become general among the Chatti, of letting the hair and beard grow as soon as they have attained manhood, and not till they have slain a foe laying aside that peculiar aspect which devotes and pledges them to valour. Over the spoiled and bleeding enemy they show their faces once more; then, and not till then, proclaiming that they have discharged the obligations of their birth, and proved themselves worthy of their country and of their parents. The coward and the unwarlike remain unshorn. The bravest of them also wear an iron ring (which otherwise is a mark of disgrace among the people) until they have released themselves by the slaughter of a foe. Most of the Chatti delight in these fashions. Even hoary-headed men are distinguished by them, and are thus conspicuous alike to enemies and to fellow-countrymen. To begin the battle always rests with them; they form the first line, an unusual spectacle. Nor even in peace do they assume a more civilised aspect. They have no home or land or occupation; they are supported by whomsoever they visit, as lavish of the property of others as they are regardless of their own, till at length the feebleness of age makes them unequal to so stern a valour.

Don't tink I'll stop for a chin-wag...doesn't look all that chatty to me ;)

Excellent render, great atmosphere and superb work on the textures.

He looks awesome a wonderful image my friend :)

"Beauty and the Beast"