The Infolinks popup test really left me unhappy about the direction Rendo was going Things seem to be back to "normal" without any more over the top external links, so I thought I'd go ahead and add a couple more gallery images.

Back story:
"Princess Arlwen has been traveling alone now for several days through the forbidden Desert of Cheroaina on her quest to find the Chalice of Aldar. Minutes before she scummed to the power the evil wizard Merlas Fireeyesave, Princess Arlwen's mother told her the chalice would give her the power to defeat the cruel wizard, and free her kingdom from his powers. Her dangerous journey through the dessert has been without peril so far, but she knows she can never let her guard down. The desert is known to be cruel and unforgiving to those who do not respect it's power. Suddenly she hears mysterious sounds like muffled voices in the distance. Expecting the worst, Princes Arlwen readies her bow as she takes a better vantage point. Then suddenly she detects movement in the distance ........"

This image started off just as a simple example to help a DAZ Studio user to improve on the details and lighting of their work. Then I realized that I liked what I saw, and decided to make a finished image. In the process of making the finished image, I also developed the back story above.

I hope you enjoy the story and the image as much as I did making it!!

Technical Info:
The lighting is the DS default HDRi rotated to 140 degrees. I added five spot lights to give a rim light effect on the figures right side. The character is based on Marilla from DAZ, and the outfit is Y"vas from Aeon Soul . I added a few morphs to the character, and adjusted the shaders a bit. The hair is MRL Gem Hair and the scene is from Muelsfell Modular Red Rock Canyon. I modified the shaders for the rocks, ground, and cliff to make them fit the vision I was after, and to darken them so the figure stands out more. The steps taken for post processing in Gimp were:
1. Adjusted levels to improve contrast and brightness. This image was a bit dark, and normally I would adjust the exposure value in Tone Mapping, but I thought this would provide a bit better example of how adjusting level can make an image much better.

2. Copied and pasted the levels adjusted image to a new layer.

3. Added vignette to the base (1st) image using the Vignette filter in the G'MIC QT plugin in GIMP.

4. Ran the unsharp mask filter on the top layer (pasted layer) to enhance the details.

5. Added vignette to the base (1st) image using the Vignette filter in the G'MIC QT plugin in GIMP.

6. Ran the "Light Glow" filter in the G'MIC QT plugin in GIMP to help highlight the figure.

Please be sure to zoom to full resolution to see the details. Thanks for stopping by!!

Spectacular image; excellent result for all the hard work and lovely tonality to it.

It would be interesting to see how a non-procedural version just using dof and vignette from within daz would compare.

Thanks!! If your interested, the thread that started it all, and shows the before and after images, is in the DAZ forums here: before image doesn't have vignette from Iray, but it would give virtually the same effect. I often use it in Iray, but I can have a bit more control in Gimp. To help accentuate the darkening of the edges/corners I'll often add a larger vignette to the base layer, then a bit smaller one to the unsharp mask layer (a semi-transparent layer).

Outstanding job on this magnificent image. She looks gorgeous, and ready for anything that might come her way. 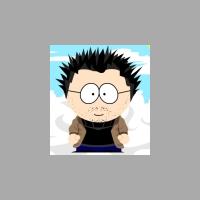 Wow awesome render, superb work on the pose and lighting my friend.

This is beautiful work.

I think I have a lot to learn from you....you're a master and this image is a good example of your great talent and skills.

Very nice Elf archer. The realism in the image is stunning!

I would be ready for her if she was to put her weapos down. her realism is outstanding