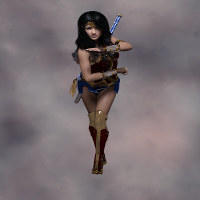 Love to create many ideas into artwork! Hope you like my work.

Here's the my artwork of The Justice League's Newest Unstoppable Foe whose powers seems to be limitless!!! The creature was created to be the most destructive being in the world created by scientist and they succeeded to bring a being of terror not for this world but for all worlds!!!! It teamed up with Maxwell Lord because of his deception to it believing that they will be partners to create a new order and peace. So thanks to him he created an armor for it to help get control of it's own power. The first test was Maxwell business which led to a total devastation half of the city! But as usual the Justice League will intervene to stop Maxwell, so he told it lies about the league of how they are the ones who ordered the scientists to created it and make it as a slave for power! So, you see the result of his anger towards them. Will the Justice League find a way to stop it, convinced it that Maxwell is the true enemy or perished?!! We'll find out more of the future if there's a future left!

Thank you so much!! It took me a while for this one but it was worth it! Thanks again

The Experiment has Arrived!!

The Olympics in our Hearts!

The Eye of the Tiger!