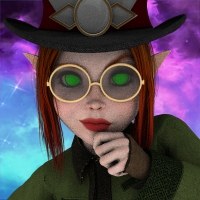 I'm a DAZ Studio user who tinkers about with rendering. I'm into fantasy and science fiction. I love mechs and magic. I prefer Victoria 4 over the rest of the current figures currently out there. I play a lot of games so i don't have much time to render.

Change of Fates by Mechins ()

In the ruins of an old underground temple, Kalia, Berry, Edna and Molly have a change of fate. Kalia and Berry switched jobs, while Edna and Molly switched as well. Kalia gained all of Berry's magic knowledge and Power, while Berry gained Kalia's agility and combat skills. neither switched personalities much. Molly and Edna however. . . Molly became a healer with all of Edna's powers and knowledge, but lost a part of her mind. Edna gained Molly's strength, skills, and the darkly twisted half of Molly's personality. Molly is not exactly happy about it. Everyone will have to watch out for Edna now. redrum. . .
DAZ Credits: The Alchemy Chasm, Hadara Hair,

Very cool image - the one at the bottom left is definitely not happy about the switch :-)

Walking in the City

In the Hell Cave

Running Runs in the Family