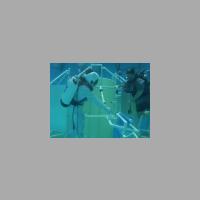 Hi, OK I am going to keep adding to this as I get the time.  Here's a little bit about me.  I live in the UK (England) in the county of Yorkshire and have been working with Poser (Version 6) for the last few years.  I still consider myself a beginner when it comes to Poser even though I have created quite a few pictures.  It was never my intention to put my pictures on display at Renderosity or any other site for that matter, but folks who know me and have seen my pictures have talked me into doing it.  I do hope you like what you see and any comments are most welcome.

One last thing I want to mention.  For those of you who are wondering about the avatar I am using and the picture above.  That is a picture of me in the Underwater Astronaut Trainer at Huntsville in Alabama in the United States.  Since 2004 I have had the opportunity to train as a Mission Specalist for the Space Shuttle (no I have not been into space and its highly unlikely I will ever get to do so) firstly at Kennedy Space Centre in Florida and since then at Huntsville.

Well for three long years I have been away but in all that time I have been very, very busy. So what have I been doing? The answer is writing a book which I have just published via Amazon’s Kindle Direct service.

So what’s the book about? Well basically it’s about me and the life I have led - a life which I like to think has been less than ordinary:-

Phil Reeder – Been there, done that, got the tee-shirts

I went looking for all of the above, and I found them. Then there’s the list of things that I did not go looking for. Things which instead came looking for me.

Have you ever read about anyone who fell into a very deep mine shaft and survived? If you read this book you will do.

Have you ever read about anyone who had an armed police escort to an International Airport Long-stay Car Park? Yep you guessed it.

And last, but certainly not least

Have you ever read about anyone who had his brakes fail whilst trying to stop at a set of traffic lights, and was then smashed into by a brand new Mercedes Benz, with personalised number plates which just happened to belong to a local newspaper? If you read this book you will do.

And trust me there’s lots, lots more tales to tell.

Since the very first moment of my life, from the moment of my birth I have had a life which I like to think has been less than ordinary - and it’s not over yet.

Things just seem to happen, either for me or to me. Call it fate, call it Karma, call it what you like and I have to wonder, what’s just around the corner, waiting for me to go looking for it, or for it to come looking for me.

So for all of you out there who are interested and would like to know more I would suggest a visit to an Amazon web-site and doing a search for:-

From Coal Miner to Astronaut A Life Less Ordinary

Now this has not been a short project. It’s taken three very long years to complete and has in total the following interesting statistics attached to it:-

Not One but Two Appendix

One Hundred and Two Chapters, covering a total of 405 A4 size pages (that’s about 800 paperback book size pages), Two Hundred and Fifty Six Thousand Nine Hundred and Ninety Two Words with over One Million Characters.

And there’s even more because the work became so large an undertaking that for various technical reasons a Blog had to be created to support it. A Blog which can be found at the following web-address:-

I could say more but why not go and have a look at the Blog for yourself and if you like what you see why not consider going out and buying the book.

I hope to be back here one day with more of my artwork to show you. The book will tell you toward the end why I went away in the first place and of the traumatic events which led to me giving up artwork creation.

You have all been my loyal fans in the past. I hope you will continue to be in the future.

My new book - A.B.I.S. America Back Into Space by preeder ()

Taking America Back into Space

Since 2004 I have had the great honour and privilege of attending as a trainee on programmes either organised by or supported by NASA the American Space Agency, firstly in January 2004 at the Kennedy Space Centre in Florida and then from October 2005 onwards at the US Space and Rocket Centre in Huntsville in Alabama. Now calling on all the knowledge I have gained on those programmes plus expertise I acquired as the writer of my autobiography, and its follow-up volume, both of which are on sale on the Amazon.com web-site, plus the skills I developed as an artist, using Poser to create over 800 pictures for my gallery on this web-site, I have worked to create his first work of literary fiction, a book entitled ABIS which stands for – America Back Into Space.

In a recent media realise in the UK I had this to say about my latest creation:-

“Like most things in my life this new literary work never started out its life as a book but instead started out its life as a model building project with a detailed write-up to accompany it. Then having taken up an interest in computer generated imagery it made the transition into an artwork project with write-up’s of up to 4000 characters in length which I planned to include in my gallery on the internet’s Renderosity artists web-site before it become a true literary work whose creation was inspired by my first written work, my autobiography, a work which is even now on sale on the Amazon.co.uk web-site along with its follow-up volume.

ABIS is a Science Fiction story which I have tried to base as much as possible around hard Science Fact (Space and Aero-Space) concepts with nearly 500 original pieces of artwork I have created to support it. It is a story about drive, determination and triumph over adversity and what might be possible if the right political, financial and technological circumstances were in place. It is the chronicle of how one man was given the chance to turn his dream of taking America back into space after the end of the Space Shuttle programme into a reality. It is also the story of how a multi-media tycoon helped keep America’s greatest space faring adventure secret until it was time for the American people to truly know what it was all about, and the true direction it was taking along with the story of a reporter who became aware of the secret and who was given the job of bringing that secret out of the darkness and into the light by making the American people aware of its existence and finally it is the story of a NASA astronaut, and the team she would lead on America’s greatest ever space faring adventure so far”.

For those who would like to see more of my new book below you will find its web address on the Amazon web-site:-

I have arranged with Amazon to have 47% of my new book viewable for free.

Part of the ABIS story has already been covered in the past in my gallery here at Renderosity, but in my new book you will find for the first time the full story, the many thousands of words and the nearly 500 pictures which I have created to make the story complete.

it is my hope that you will find the time to go and have a look/see at what I have on offer.

all blacks in ship good one

From Coal Miner to Astronaut - A Life Less Ordinar

An Agent in Gold and Yellow