Underwater:: your turn next by Anthony Appleyard ()

You dived with shellfishing gear in a wrong place and too late. Unlike fish, the harbor patrol men with their silent bubbleless on-chest rebreathers keep on through a maze of your mates' open-circuit aqualung bubbles. His eyes reveal no emotion above his industrial-looking clip-on breathing connection and his backpack motor's propellers shred scuba bubbles as his powerful underwater ultrasound gun makes a quick end of Jack and then Derek. The other patrol man takes out you and your buddy Jim. Next, they will turn all the aqualungs off and via modulated ultrasound arrange security-mode recovery of what is left. Disposing of intruders who have modern "single-hose" air scubas, is a much less bubbly job making less for out-of-water public to see. 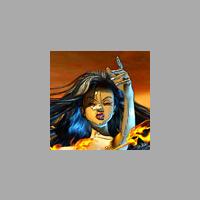 Critique : Anyone who's used Poser knows how time consuming it can be to include so many figures. Even if it's the same figure because you still must pose each one. So wonderful job on assembly and execution of a complicated underwater scene. You might've blurred or faded the background a bit but that's just my thinking as unlike you, I've never gone scuba diving. So it probaly looks that way. I know, I suck. It's on my list of things to do, though

The most prominent diver has his right forearm a bit bloated. The other divers have thick forearms which is okay because according to the narrative, they are tough fighting men. But his sticks out. You already know how to fix this so just be aware.

The flippers are bent properly on each man so that it appears they are indeed in swimming. It's one of the details that if you don't take care of it, it's noticed, if you do take care of it (and you did) it is taken in as whole as regarded as natural.

"The other patrol man takes out you and your buddy Jim." "Takes you out and your buddy, Jim." would be more proper way of stating this. Sorry I'm a grammar Nazi so I'll nitpick there. Shoot, the missing comma may be the only real grammar error. In any case, we're done nitpicking and just enjoying the scene as a whole which I just 5 stars. I've downloaded too many of your freebies to do otherwise but it's deserved nonetheless.

"The most prominent diver has his right forearm a bit bloated" :: that forearm is nearer to the camera, so it looks larger.

"The flippers are bent properly on each man" :: I made the fin model, and the 2 segments of the fin blade have the Curve property.