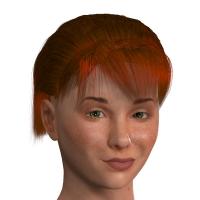 Exercise in reproducing a pose from a picture. Because of the arm pose, I used the weight-mapped Sasha16 rebuild of Victoria 4 (Vicky herself is notoriously bad at the arms over head pose).

Honorine was only used for the texture. I think the face character started out as DAZ3D's Dulce before tweaking (I forget and it was exclusively dial based with no named morph injection) and I can't recall which character is the base for the body (again, tweaked by yours truly).

Ricardi Hair (with custom mods to the diffuse texture) and Nerd & Preppie panty from DAZ3D.

Truly delightful... I'm glad they're legal... I'd hate for her to get in trouble for her very decent exposure!

Like the idea a lot, but there should be something "legal" in the picture, e.g. lawbooks on the shelf.

Great looking pinup and scene with an interesting character

Down but not for the count