Man I'd shrivel to dried raisin down there in no seconds flat. 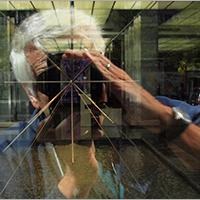 Looks like a hot day coming. Great time of the day to capture the essence of springtime in Arizona.

It's like being there! I have a hard time looking at the sun in your picture, it's so bright!

It looks like paradise is not far away ;-) Great atmosphere well captured