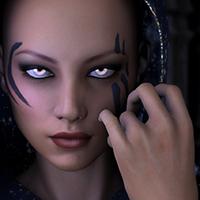 “Ambition is like love, impatient both of delays and rivals.”
~Buddha

Not sure where these two came from. It's been quite some time since anything like an OC began rattling around my brain -- now, suddenly, two at once.

I think they might be vampire hunters. I KNOW they compete furiously. They think they hate each other. But after seeing how this image turned out... I don't think I believe them!

Hopefully, they'll tell me more about their rivalry soon. And, you know, maybe they'll also tell me their names?

No Vampire Hunters were injured in the production of this image.

Peace Keeper for G3F and G8F

I think its a draw! Fantastic image!

Lol -- I'll keep you posted on how it turns out for them. Thank you for the kind words!