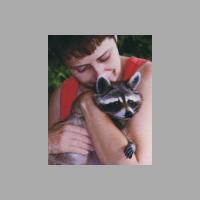 The Trouble With Tribbles by Krittermom ()

For those Trek fans, remember the Tribble?
They were quite cute and lovable. They caused trouble because they multiplied at an alarming rate. This beautiful bundle of mischief is a baby otter. I named him Tribble. Not because he multiplied but because he could cause trouble in many places at once. I got him several months ago from the state. He was found walking down a road with bloodied feet. The pavement was hot and had blistered his feet.
I had him for 2 months. I fell in love. He was a fascinating animal. He lived to eat and play. When he was tired he put himself to bed. After searching over my entire state, I found no other otter kits in rehab. It is very necessary for them to be raised with another otter for proper rehab. I ended up driving him to Mayaka Florida where I found a wonderful place. The couple there do only otter rehab. Tribble is now released with two other otters. He does come back to their house once a day or so for a treat with his friends. These wonderful people let me stay for several days until Tribble stopped calling for me when ever he could not see me.
While it pulled at my heart, I knew he was better off there.

What a mischievous little face. Love hearing about your critters & the amazing work you do. Hope Mr. Tribble lives a long & happy life.

Such an adorable little fellow - sweet capture and heart-warming story! thanks for sharing 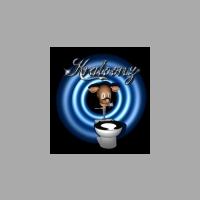 What a wonderful picture and story.

You are such a wonderful person to give these delightful souls a chance for a new life. What an adorable and beautiful little face!

That was absolutely my favorite ST episode... I loved the whole episode, but my favorite part was when Scotty told Kirk that he'd beamed all the tribbles aboard the Klingon ship - where they'd be "No tribble at all..."

Superb capture. Glad he is in good hands. God bless.

Awww ... what a sweet face! I can see why you fell in love with this little guy. Glad to know he's back out in the wild. You do good work! :)

Thanks for posting! He sure look the innocent one until.... So does Kitty. She went for my used underwear yesterday - not easy to get her to lay off, so I played her tired of them. Saturday, when changing pants, she decided my right calf would be a good scratch pole! OOPS! OUCH! First time she's done that. And I assume the otter was having a lot of fun with you. Calling when you've gone. Says a lot about these critters. Keep up the good work! :-)

What a fabulous story and photo!

Beautifully written,bought a smiles & a tears to my eyes.so glad he found his forever home.

He has a face anyone would fall in love with. Stunning photo! 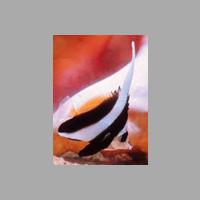 What a cute face glad you found him some friends to live with.

OMG, what an adorable face...I hope all goes well for him in the future and that he stays off hot roads...