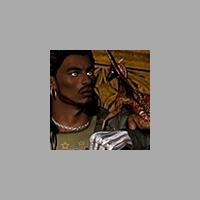 Over Rated by Byrdie ()

"Sherlock? I think you've forgotten something."

"Highly unlikely. I may often remove irrelevant data from my brain, but I never forget."

"Boring! I told Lestrade yesterday it barely rates a three."

"Well, you can tell him again today." Pointed stare. "After you put on some pants."

"Hmph! Pants are over rated."

"Yes. Well. Call me old fashioned but I really would prefer it if the whole world was NOT staring at my husband's backside. Put. On. Your pants."

"Oh, all right. If you insist. Turn around."

"Too late, I've seen it. Many times. Husband, remember?"

"Elementary illusionism. You see the truth whereas the world sees trousers."

"Amazing! Now about that diamond?"

"Yellow, fifteen carats, badly flawed, in a hideous gold setting. Supposedly found in Bolivia in 1863 by Nicholas Flamel, later to become the first Duke of Mazarin. Rumored to give its owner all sorts of supernatural abilities, including immortality. Lestrade needn't bother hunting the thief. There isn't one."

"Solved it already, have you? Insurance fraud, I suppose."

"Hogwash, more like. No crime, just a publicity stunt. Dreamed up by whichever imbecile in New York is responsible for promoting the Duke's latest literary endeavour."

"His Grace wrote THAT?!"

"Under a pseudonym of course, and highly fictionalized to protect his privacy as well as his husband's life, should their enemies discover the whereabouts of the spy who escaped their wrath. Even so, he never would have made such a glaringly obvious error."

"Obvious to *you* maybe. Not to us lesser beings."

"Pfft! Obvious to anyone with more than two functioning grey cells. Mazarin's gem wasn't stolen for the simple reason that it never existed in the first place. The very name is a giveaway, my dear Watson, as any mage will tell you. There is no such thing as a Sorcerer's Stone."

I hadn't planned on a cross-over, but the more I wrote the more obvious it became.

Depths of the Oratory