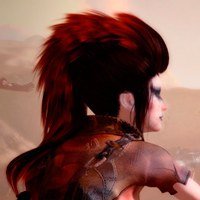 I Want To Be a Bird by dollmommy ()

This piece was composed and rendered in PP2014.
I used on of Dimensional Theory's HDR from Yosemite series.
You will notice several birds from Song Bird Remix as this was my entry for that contest. It didn't place but I was only doing it for fun. I included one of God's angels on earth as the child as I believe that the Down's Syndrome children are so precious and in this she is wishing she was a bird so she had no limits.
The morph is one of the freebies that goes with Children of the World that Tosca produced.

You have a great sensibility in feelings, the image is absolutely sweet and well done !!

Searching for the Rainbow

The Two Sides of Sanity

Phantom of the Opera

Who's Minding the Asylum

Timeless Beauty on the Beach